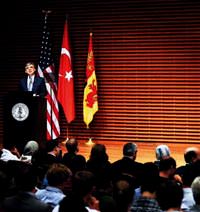 Gül gives a talk on leadership at Stanford University: “Because I was too embarrassed to yell out as I child, I continued my education. I could have been very rich, but then I wouldn’t have become President.”

President Abdullah Gül delivered a speech on leadership at Stanford University, one of the world's most prestigious education institutions. Sharing personal experiences, Gül stated that as a child, his uncle tried to get him to sell soda; however he didn't pass the test, because he was unable to yell out, 'Ice old Soda!' "If I had been able to sell those sodas that day, I may have been rich today, but I couldn't have become president."

President Gül was met with two interesting figures in his life at the university. One was his counterpart when he served as Minister of Foreign Affairs Condoleezza Rice, while the other was his oldest son Ahmet Gül, who lives in San Francisco. Former U.S. Secretary of State Rice greeted Gül by stating "I am so pleased to see you again." Meanwhile, Gül referred to Rice as 'Condo'.

Gül gave a lesson on leadership to students at the Stanford University Graduate School of Business. Explaining that leadership can sometimes be the result of failure, Gül relayed a childhood memory to defend his argument. Mentioning that his hometown Kayseri is well known for its entrepreneurs, Gül said, "If a child appears to have a certain talent, their family will immediately try to push them into the business world. If that child isn't very good at marketing, then they will be made to continue their education. I remember being given such a test! My uncle wanted me to sell soda by yelling out, 'Ice, Cold, Soda!' However, because I was too embarrassed to yell I wasn't able to sell any soda. If I had been successful that day, then I probably would not have become the President of the Republic of Turkey today. Then again, if I had been successful in selling those sodas, I probably would have been richer today. "

Gül also expressed that leadership means steering towards speaking the truth, and used an example from when he was a candidate to become the chairman of the Welfare Party in 2000. Gül explained that he took a great risk by telling party members that the politics they were conducting was completely irrelevant to the party's history. "This reform, innovative strategy and expression laid the groundwork for the AK Party."

After delivering his address, President Gül answered questions posed by Rice and graduate students. An attending professor at Stanford University, former Secretary of State Rice asked Gül, "Can Islam and democracy exist together?" Gül responded by explaining that even though Turkey's majority is Muslim, democracy operates excellently. Reminding that since 2002, they have made significant reforms, Gül stated that the democracy in Turkey is an inspiration. Also mentioning that they have begun work on drafting a new constitution, Gül stated, "In the near future, we will be seeing a number of nations in which Islam and democracy coexist."