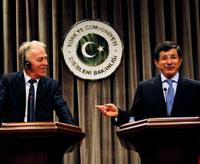 Davutoğlu states that the legal procedures regarding the two Iranian lorries had come to a close and therefore there was in no way an exchange made for the two Turkish journalists held in Iran after being detained in Syria.

Foreign Affairs Minister Ahmet Davutoğlu refuted the allegations that Turkey staged an exchange of the two Iranian lorries for the two Turkish journalists that went missing in Syria. Confirming that the lorries have been returned, Davutoğlu stated, "There was in no way an exchange. The legal procedures involving the lorries was a process involving UN sanctions."

After meeting with EU Term President Denmark Minister of Foreign Affairs Villy Sovndal, the two held a joint press conference. In regards to operational control of the radar missile defense system being transferred to NATO, Davutoğlu stated, "When the setting-up phase of the project came to an end, the operational control was handed over to NATO. Therefore, the facility is a NATO facility and it has a NATO flag. As is the case with a number of NATO facilities, member nations will utilize facilities to their advantage during the setting-up phase."

Davutoğlu went on to explain that Kürecik employs staff from NATO member countries, and stated; "Because the facility is located on Turkish land, its protection and control will be tied to the laws of the Republic of Turkey. There should be no concerns on this regard and everyone should be respectful of this fact."

While Davutoğlu expressed his request that following the court ruling regarding Roj TV, all of its operations be halted in Denmark, Sovndal responded by stating that being a country that is engaged in the fight against terror, they would also not like to permit such a television station to operate, however they do not as yet have the authority to shut it down. However, Sovndal stated, they are working on a law amendment that would grant such authority.