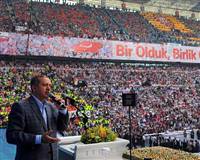 Speaking at the Congress, AK Party Chair and Prime Minister Recep Tayyip Erdoğan first greeted all of those that had come out from all over Istanbul. "We are in love with the people from this city. We are in love with Istanbul which is the essence and summary of Turkey."


Erdoğan brought the issue of the fight against terrorism, touching upon the Uludere incident to say that there are certain parties, including the media that are trying to redirect the situation. "An incident that has greatly saddened all of us transpired in Uludere," said the Prime Minister. "Look, even though the incident took place beyond our borders, and despite the fact that they were travelling through a region frequented by terrorists and were committing an illegal act at the time, the state is doing everything in its power in response to mistakenly targeting the civilians. Efforts have been made to find a solution to the difficulties these people face, and the families of the deceased have been visited by the highest levels of state."

Prime Minister Erdoğan went on to state, ''They have received compensation, even beyond the legally established figure. The issue doesn't end there. Certain people just don't want to understand and refuse to see, that a legal investigation has been initiated into the Uludere incident, which is currently ongoing. The issue has not been closed; it has not been covered up," stated Erdoğan referring to allegations in the press that compensation was paid out in order to cover up the tragic error.

'WE HAVE NEVER HIDDEN ANYTHING FROM OUR PUBLIC, AND WE NEVER WILL'

Prime Minister Erdoğan stated that in the struggle against terrorism, which has gone on for 30 years now, Turkey has lost 40,000 citizens. "Thousands of our soldiers, police and security forces have paid witness to these bloody events. However, unfortunately this society was never given the opportunity to question these painful events.

The media avoided asking the right questions. Certain parties exploited the situation while others closed their eyes to what was happening and remained silent. While some parties promoted the terrorist organization while at the same time conducted politics on the youth in the mountains and the bloodshed.
For the first time ever, the AK Party came on board and said with courage, sincerity and a heartfelt 'no' to the exploitative politics, the insensitive politics, the bloody politics. We didn't cover anything up and we never would. Quite the contrary, we are the sole party that is questioning those responsible for this nation's darkest periods in history. We are the first party in the history of the republic to lift the denial, dismissal and assimilation policies and to embrace our Kurdish citizens. So, no one should attempt to give us a lesson in conscience or humanity."

'IN NINE AND A HALF YEARS, TURKEY HAS BECOME A REGIONAL FORCE'

"In nine and a half years, we have grown over three-fold to become a regional power. We did this with Istanbul's support and have brought Turkey to this level. We even laid the foundation and staged the opening of this arena, Turkey's largest stadium to date. Erdoğan stated that at present there are over 6.5 million AK Party members, two million, 600 thousand of which are women.

Erdoğan went on to announce that they are working on a number of significant projects for prior to June 12th and stated that they are currently involved in the preparation stages involving studies, feasibility and impact analysis. ''Work on Kanalistanbul continues and hopefully we will be able to take a step on the project within the year. Then there are the 'Islands' and "Two Cities for Istanbul' projects, one on the Asian side and the other on the European side. The preparatory work continues on these projects. 'City Hospital' in Istanbul's İkitelli is another project that we have already received proposals on. We are still working on the project, but once its owner has been determined, we will lay the foundation. We also mentioned a city hospital in Sancaktepe, we will begin work on it once the land has been appropriated to the Ministry of Health by the National Defense Ministry. We also talked about the Taksim Square project, of which the first stage of the tender process has begun. We hope to finish the project in eight months' time."

Prime Minister Erdoğan also brought up the Marmaray Project, explaining that they have built 40 different stations on both the Asian and European sides. The Marmaray rail project, which is intended to increase the eight percent share in the city's transportation incurred by the railway system up to 28 percent, is a 76 kilometer long line, 14 kilometers of which are underground, a portion of that which also traverses under the sea. The Marmaray rail, which will connect the Asian side of Istanbul to its European counterpart, will be able to transport 75,000 passengers an hour each way. Once completed, a train will take off every two minutes, bringing the commute from Üsküdar to Sirkeci down to four minutes and the distance between Gebze and Halkalı down to 105 minutes.

Erdoğan went on to explain that the construction is still ongoing for the Istanbul Bosphorus iTube Crossing Project as well as construction on a new railway system from Halkalı to Kapıkule. "We are also planning on holding a tender in the upcoming period for the building of a 230 kilometer long railway from Istanbul-Tekirdağ-Kırklareli to Edirne."

Erdoğan also relayed information on the Sincan-Çayırhan-İstanbul Railway Project and stated that they aim to hold the tender for the railway connections to both the Atatürk and Sabiha Gökçen airports this year. The Prime Minister also stated that they have determined the location for Istanbul's third regional airport and that they expected to complete the Ankara-Istanbul High Speed Railway Project by the end of 2013.

''The test drives of the one billion, 600 million dollar Kadıköy-Kartal Metro Line are ongoing. The stations have almost been completed. Once the security tests have been completed in July, we aim to open this line to passengers.

We are building the Bus Station-Bağcılar/Başakşehir-Olimpiyatköy Metro for one bullion and 472 million dollars. Last year, we held the tender for the Üsküdar-Ümraniye-Çekmeköy-Sancaktepe Metro and we have begun working on it. Construction on the Haliç Metro Transit Bridge is ongoing. We are hoping to complete this bridge, which is approximately one kilometer long, 480 meters of which is over sea, by the second half of next year. Hopefully, we will be able to go into the local elections having developed these significant projects up to a certain level and will have completed a number of them."