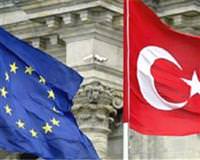 Turkey is nearing the final bend towards establishing the right to visa-free travel in the EU. The most critical decision in the ongoing cut throat negotiations will be from France.

Brussels has shown a sign of hope in regards to the lifting of visa regulations for Turkish nationals travelling to EU nations.

While the stand-off between Turkey and the EU on the lifting of visa regulations and the readmission agreement continues, EU term president Denmark has made significant strides in attempting to unravel the knot.

While a number of EU nations have approved in principle exempting visas for Turkish nationals, France remains to be the key nation to determine whether the regulation will pass.

Foreign Affairs Minister Ahmet Davutoğlu has been closely following developments and while meeting with EU Commission Enlargement Commissioner Stefan Füle last week, the two laid the issue on the table. Davutoğlu is also speaking with EU Commissioner for Home Affairs Cecilia Malmström over the phone regarding developments on the regulation. While the commission wing tends to support Turkey, term president Denmark is also conducting intensive and sincere effort in order to persuade member nations. It appears that these collective efforts may soon bear fruit.

Germany is on board

Although Germany, Austria and Holland had previously expressed that they did not even want to debate the possibility of visa exemption; it appears there is now an obvious change in stance. At this stage there are just two countries remaining that have yet to approve the Committee of Permanent Representatives text. There are the Greeks, who refuse to approve the protocol because of a request to reference that "all member nations will be subject to the agreement without discrimination," and France, which is having issues establishing a position due to the current administrative transition.

Both Turkey and the EU are waiting on a decision to come in from France. During the Nicolas Sarkozy era, France had taken on a negative stance to the visa-waiving concept; however speculation says that there is a high probability that the new administration under François Hollande may light a green light on the concept. Neither the EU nor Turkey are expecting France to reach a decision prior to the June 17th parliamentary elections, however the door is not closed entirely on the possibility of a last minute development to come in the form of a step being taken by Paris. A negative decision reached by France could block the entire process, while a positive response could have the potential to eradicate all of the issues holding the process up.