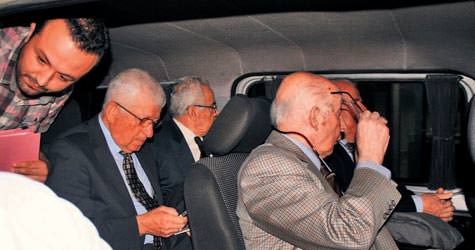 High-profile military members responsible for ordering the formation of the West Working Group were called in to testify yesterday in the fifth wave of questioning in connection to the February 28th, 1997 ‘postmodern coup’ investigation. Warrants have been issued for the arrest of nine retired generals who served on the National Security Council prior to the ‘Feb.28th period’.

Yesterday's wave of questioning differed from the four previous in the sense that the four of the nine military members obtained were Land and Air Forces Commanders or Gendarmerie Commanders. In addition to being high-level military leaders during the February 28th process, the figures questioned yesterday were primarily brought in for being members of the National Security Council and participating in the infamous meeting held on Feb. 28, 1997.

According to the information obtained, the prosecutor has ordered these four individuals to be questioned in connection to a testimony provided by Çevik Bir in previous waves, which states that the high level military officials played influential roles in the National Security Council leading to the foundation of the West Working Group. This marks the first time the prosecutor has decided to question members of the National Security Council that gave the orders to formulate the West Working Group rather than the individuals responsible for operating and being members of the group. After arriving to the capital and undergoing medical checks, all nine suspects were brought to the Ankara Court.
After providing testimonies a warrant was issued for all of the nine suspects brought in. Once Special Authority Prosecutor Mustafa Bilgili and the attorneys assisting him completed processing the already detained General Çetin Doğan, retired Lieutenant General Metin Yavuz Yalçın and MHP deputy and former Lieutenant General Engin Alan, a warrant was issued for their arrest. Retired Generals Teoman Koman, Ahmet Çörekçi, Hikmet Köksal, İlhan Kılıç and retired Lieutenant Generals Vural Avar and Kamuran Orhan who were questioned later were transferred to Ankara's 12th High Criminal Court. Meanwhile, retired colonel Hakan Cemal Pelit, who has been wanted since the fourth wave of questioning, turned himself in yesterday. The prosecutor has since requested Pelit's transfer to the court with a warrant for his arrest.