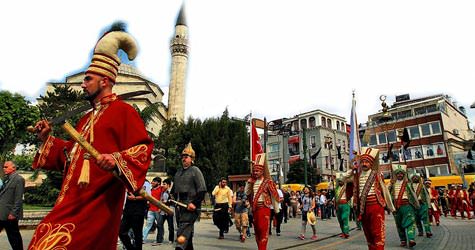 Istanbul celebrated the 559th anniversary of the Conquest by Fatih Sultan Mehmed, with a performance by the Mehter janissary band which marched from Beyazıt to Sultanahmet.

The day began with a visit to Fatih Sultan Mehmed's mausoleum, located in the courtyard of the Fatih Mosque. Later, celebrations commenced with a march by the Janissary band from Beyazıt to Sultanahmet and the evening boasted a visual effects show and screening of 'Conquest 1453' on the Golden Horn.

The ceremony commenced with a performance by the Istanbul Metropolitan Municipality 'Mehter' Janissary Band which conducted a 'Conquest March' from Beyazıt Square to Sultanahmet Square. Starting at ten a.m. yesterday, the band marched along the tramway line as they distributed flowers to residents and tourists alike. The march lasted approximately an hour and ended in the Sultanahmet Square, where the band proceeded to perform a concert.

Yesterday's deliberations varied from those staged in the past. According to new regulations, passed on May 5th, official holiday celebrations are now designated by a special celebration committee established by the district governor. Official celebrations will now be geared towards educational gatherings, conferences, exhibits, contests, plays and folk dances. As a result, certain celebratory rituals were not held this year, including the reenactment of the 'conquest' traditionally staged at Belgradkapı.

Yesterday's celebrations did stage a number of firsts as a reading of the Koran and a prayer service held at Hagia Sophia Museum was broadcasted on TRT 1. The Golden Horn was transformed into a show of water, lights, sounds and visuals, with a Rainbow demonstration repeated this year. Also the film 'Conquest 1453', fully equipped with 3D technology was shown on a mega 1,088 square meter screen, using eight different projectors.