Uludere was a mistake and we will do whatever necessary 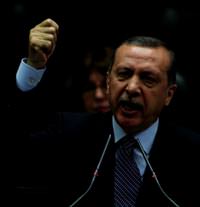 In a highly anticipated speech, Prime Minister Erdoğan discussed the Uludere incident during yesterday’s AK Party group meeting. Emphasizing that the government will not be made the scapegoat, Erdoğan said, "We have said over and over again that it was a mistake. Those that caused this mistake will be made to pay the price.

"We will not let the state be made the scapegoat," stated the Prime Minister who went on to explain that the government has done more than their share when it comes to the Uludere incident.

WE WILL NOT TURN THE STATE INTO THE SCAPEGOAT

We will not permit those trying to overshadow national will, nor will we pay heed to those intending to turn the state into the scapegoat.

Tragic incidents such as this one have transpired in every military throughout the history of the world. Catastrophic mistakes have been made in the struggle against terrorism. Right now, there are dozens of police that are being tried with life sentences for 'intentional manslaughter' from similar incidents.
Our governors, police chiefs, our commanders and the teams under them have all been given and give out definitive orders to not intervene unless they are '100 percent sure'.

Put yourself in the place of the police or gendarmerie tracking a vehicle headed for Kayseri's Pınarbaşı district. Security forces could destroy that car, however what if the people in it are just cigarette smugglers? At that point all the security forces can think about is the orders they have received to be 100 percent sure in any sort of intervention otherwise they could face life imprisonment. There is such heavy psychological pressure put on our security forces, it's as if the environment has been set up for them to fail. We must not forget that those fighting against terrorism are people too.

Despite the fact that from the very start we have been expressing that a mistake was made in connection to Uludere, people still say 'the Prime Minister should say a mistake was made'. We have already said that, how many more times are we supposed to say it? We would not try to cover up any sort of error nor would we stage an execution without due process for a mistake made.

Wall Street Journal: What's it to you?

We understand the exploitative efforts made by the terrorist organization. We also understand the exploitation made by the BDP, because their strings are in the terrorist organization's hands. However, it is not an acceptable situation for us to see CHP, the media and even the international press trying to exploit this tragic situation. This incident has international implications, which is namely the Wall Street Journal… What do you care? What is it to you? Who is it that ruffled your feathers? Because they work for someone they are trying to disrupt the current administration. Why? The current administration is on good terms with Turkey and supposedly this is a discomfort for them. Why? Because, the Jewish lobby is uncomfortable. A conspiracy within a conspiracy. The state and the government have done more than what befalls them in regards to the Uludere incident. Nothing is being covered up."

WSJ insists
The very same Wall Street Journal to which Erdoğan has spoken out about by saying, 'What's it to you' has once again written about the Uludere incident.
Pointing out that Turkey wants to purchase the armed Reaper unmanned aerial vehicle, however Congress members are not in favor, the Wall Street Journal reiterated its claim that the Uludere operation was based on imagery obtained from the Predator.