'We are preparing a statute on abortion' 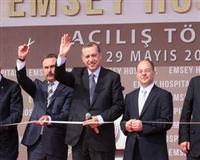 After delivering the controversial announcement that he is against abortions and caesareans during a National Assembly Group meeting, Prime Minister Recep Tayyip Erdoğan continued to deliver a number of debatable statements during an address in Istanbul for the opening of the Özel Emsey Hospital in Pendik.

"There is a serious struggle to prevent abortion in the United States," stated the Prime Minister who went on to deliver the news, "We are working on legislation for abortions and we will pass this law."

During his speech, Erdoğan went on to deliver the following statements:

"Our Ministry of Health and our doctors should be talking about this more than me. I have spoken to my minister and we are now preparing a statute on abortion and we will pass this legislation. Some people are coming out and saying, 'Having an abortion is a right. If a woman chooses to she should have the right to an abortion. You cannot intervene with her body.' Then go ahead and allow people that try to commit suicide to go ahead and do it. Why are you preventing someone from jumping off a bridge, just let them do it then. How ridiculous is this? There are two points of suffering when it comes to abortion. First, there is the killing of a fetus in the womb and second, there is the damage incurred by the mother herself. There is no difference between killing a fetus in its mother's womb and killing a person after they have been born.

This is murder. There is a serious struggle to prevent abortion in the United States. And there are laws. There are also a number of similar laws in place throughout a number of Western societies. We are also working on doing the same thing. This issue has a place in our values. We cannot allow this to take place. Of course, God forbid if it is a question of posing a threat to someone's life, then that is a different issue.

I say the same thing when it comes to caesareans. Recently private hospitals have gone quite far with the birth by caesarean option. There are some hospitals that are performing up to 60 to 70 percent caesarean births. There are some that are up to 90 percent. Why? Because there is more money made from caesarean births. Furthermore, they do it at the most critical time for births. The mother and the family just surrender.

At the same time, caesareans are nothing more than an operation to curtail this nation's population. Why? So there are not more than two children born to a family. With the caesarean method, births are restricted to just two."