Turkey opens its very own CERN 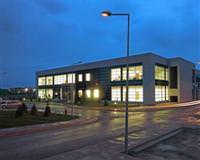 Prime Minister Erdoğan stated the following during an address at the opening ceremony:

"With these facilities, Turkey will be gaining the capacity to produce nuclear technology. We hope to present every form of nuclear medical development to our public. When we first embarked on this task, Turkey had 122 tomography machines. This figure has now gone up to 446. We will now be producing extremely important medical materials we used to import and eventually we will begin exporting. Since 2011, we have become the second fastest growing nation following China. We cannot reach our goals for 2023, with our current capabilities. We have to create a solution when it comes to energy. As the economy grows, so does energy consumption. The factors of nuclear energy that threaten human life have practically been eradicated. Just because an event transpired in Japan doesn't mean we need to drag the issue to other areas of humanity. We need to inexpensively produce energy and we need to sell it to our public for cheap. The nuclear power plant will allow us to produce energy inexpensively, will decrease our external dependence and will drop carbon emissions. By the year 2023, we want to have built two nuclear power plants and want to have started on the construction for a third. At present, there are 436 nuclear power stations in operation throughout the world. There have been three accidents thus far throughout the world. When you take good precautionary measures, then there is no issue. Every nation has the right to benefit from nuclear power. You don't see the ones in Armenia or Israel, however you begrudge Iran. We will defend this right. I feel that this facility is as important when it comes to nuclear energy as health and science."

CHARACTERISTICS OF THE NEW FACILITY

The facility is being referred to as the Turkish CERN for its capabilities to conduct scientific studies similarly to the European Organization for Nuclear Research Center in Switzerland.

The particle accelerator facility was built in order to conduct short half lifespan radioisotope production to be utilized in the medical sector. Once the facility is in operation, 'isotopes', which are used to diagnose a number of illnesses including cancer and heart disease, will be produced domestically. Turkey will no longer be dependent on the external market with the new TAEK Particle Accelerator Facility. The facility will also form the infrastructure to conduct research and development in accelerated particle technology.
High security

The TAEK Particle Accelerator Facility was built with a focus on establishing high security. The facilities will have guard stands as well as a 315 square-meter power distribution unit and heat power station. The facility was built two stories high on 3,110 square meters and contains a partial basement. The basement level has been designed to access as a station for tanks to store liquid and solid waste. A freight elevator with a direct external connection will transport waste to the ground level for its disposal.
The main part of the facility has been divided into two sections. One section will contain offices, technical rooms (cyclotron control room, electricity room and the health physics laboratory) a cafeteria, conference hall, library, and restrooms. The second section will contain A&G laboratories, preparatory storage and packaging units, a quality control laboratory, a waste storage room and cyclotron technical rooms.