PM Erdoğan: We will not leave Somali on its own 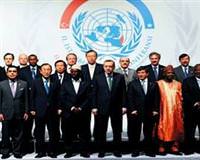 Prime Minister Erdoğan pledged his continuous support for Somalia while addressing participants at the Second International Conference on Somalia held in Istanbul on Friday.

"Without living there you cannot devise the correct policies and you cannot help. I invite the international community to open representative offices," Erdoğan told the conference attended by U.N. Secretary-General Ban Ki-moon, the Somali interim president and delegations from more than 50 countries.

The following is a number of statements from Erdoğan's address:

"This Second International Conference on Somalia provides the opportunity to bring the international community and representatives from Somalia together. Last August I paid a visit to Mogadishu with my family, where we witnessed the suffering there.

We have really struggled to make Somalia's voice heard, to make those who do not see or feel what's going on in Somalia, see and feel. We saw how difficult it was for them to fulfill their daily nutritional needs. Their children have no nation, no race.

Even though in their current environment they may have no responsibilities, children in Somalia are carrying the weight of the world on their shoulders.

We saw a baby who was nothing but skin and bones who was being treated by doctors in a tent. Soon after we left, we received the enws that the child had passed.

The issue in Somalia is one that could be solved through the unification of Somalia's brothers. We want to see Somalia rise. This Istanbul summit is what we would like to see in Somalia.

By transporting this view to Somalia, hopefully you will be able to establish a different Somalia. We will always be behind you and will always stand by you.

There is a renewal of life in Mogadishu. Homes are being renovated, streets cleaned and streets have become lively. With the close of the Somali government's transitional period in August 2012, a new era is anticipated to begin.

It is now time for Somali politicians and wing leaders to begin debating what will happen after August. It is essential to establish state establishments, a national military and s police force in order for peace and stability to be made permanent in Somalia.

Refugees and those displaced need to be able to return to their homes. As Turkey, we will be offering the strongest form of support to the Somali actors working to establish these structures in Somalia.
The formation of a new and stronger Somali United Nations Mission could be something to be considered. Stronger security within the borders of Somalia is something that also must be established.
We will always stand by our Somali brothers in the effort to strengthen the groundwork for peace."