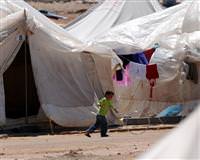 The Turkish Prime Ministry Disaster and Emergency Management Directorate (AFAD) has announced that there are 24,433 Syrians staying in nine tent camps and one container camp in Turkey.

An announcement released by AFAD states that Turkey's Prime Ministry has set up nine tent camps; two each in Hatay's Altınözü and Yayladağı districts as well as in Reyhanlı, Apaydın and Karbeyaz, Şanlıurfa's Ceylanpınar and in Gaziantep's İslahiye districts in addition to a 12,000 person capacity container city in Kilis.

AFAD said that since April which marks the start of internal clashes in Syria, over 45,000 Syrian nationals have received humanitarian aid in the camps set up in Turkey.

The announcement also stated that a high number of national and international officials including Deputy Prime Minister Beşir Atalay and UN and EU representative Kofi Annan have visited and inspected the tent camps in Hatay and the container city in Kilis.

AFAD also explained that within the week, 395 Syrian nationals have entered Turkey, while 135 people chose to return to Syria of their own accord. Up until now 45,197 Syrians have entered Turkey since the beginning of the uprising, 20,764 of which have since returned to Syria. As of Friday, there were 6,579 Syrians in Hatay, 5,753 in Gaziantep, 10,443 in Kilis and 1,600 in Şanlıurfa, bringing the total to 24,375 for Syrian refugees residing in camps in Turkey at present.

The announcement also noted that there are currently 58 people in the hospital, 43 of which are injured or sick and 15 people who are there to accompany them, which brings the total number of refugees up to 24,433.