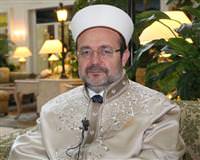 Turkey’s Department of Religious Affairs Director Mehmet Görmez has spoken out on the directorate’s view of abortion; “If there is no legitimate reason then abortion is murder and is forbidden by religion.”

Commenting on the recently surfaced debate surrounding abortion regulations in Turkey, Director of Turkey's Department of Religious Affairs Prof. Dr. Mehmet Görmez, expressed that a fetus in a womb has its own right to life and stated, "Just as how they have no rights to possession, no mother or father has the right to decide to end a baby's life."

Görmez went on to state that this important issue should not be discussed from an ideological framework, but needs to engaged in dialogue on humanity, science, morals and legalities. Noting that this was not the first time they have spoken on the issue, Görmez stated that every since the first day the department was founded they have been responding to this question in the same manner.

According to Görmez one of the main reasons abortion was considered acceptable in Turkey can be traced back to the Bosnian war and the fact that the Serbs forcibly raping Muslim women and girls was practically a weapon of war. Görmez recalls that pregnant women and children were held in prisoner camps until the risk of miscarriage had passed and in attempt to force them to give birth in order to dissolve the Muslim race from Bosnia-Herzegovina.

"Although the protection of life is a primary issue in situations where attempts are being made to eradicate the Islamic community, if Muslim women or girls who have been left pregnant as the result of rape wanted to have an abortion, it was decided that it would be allowed. Otherwise," states Görmez, "abortion is murder."

As for the question of whether or not an impregnated egg has all of the qualities that make up a human is something that should be left up to scientists, states Görmez. "It is not just the Department of Religious Affairs or Muslim scholars, but also all religions and moral and legal systems state that as long as there is not a legitimate reason, that human that has come to this world has the right to live."

Pointing out that unlike the Catholic doctrine, according to the Islamic religion, when it comes to preference between a mother and a fetus, the mother is always unquestionably given preference, Görmez states, ''I want to address a mistake everyone seems to be falling into in this debate and that is that it is extremely unjust to deal with the subject of abortion as being solely a woman's issue. Throughout history the biggest instigators have always been men and women were the ones to suffer."