Father of PKK leader rages against the organization 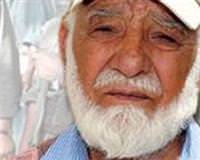 The father of Cemil Bayık, the man to take over the reins of the PKK terrorist organization after Abdullah Öcalan, AK Party member Mustafa Bayık states, “If they think the solution will be found through killing and abductions, then I am an AK Party member from the heart, let them come and kidnap me.”

The mother and father of Cemal Bayık, one of the three living founders of the PKK terrorist organization and its number two man, have finally broke their silence. AK Party member 82 year-old Mustafa Bayık retired in 1996 from the National Defense Ministry's Elazığ Military Repair and Maintenance factory. Mustafa Bayık and his 80 year-old wife Reyha Bayık reside in a village 40 kilometers outside of Elazığ. There are completely ostracized by the 80-family village and say that no one should have to suffer what they have gone through.

Bayık explains that he joined the AK Party three years ago in order to find a solution to the Kurdish issue. According to Bayık, he lost his son years ago due to poverty. "Cemil was very smart and so I sent him to school to become a teacher and to serve his nation. I was a shepherd at that time and so when the money I was sending him in Ankara wasn't enough, he was persuaded to go up to the mountains."
Bayık says his biggest wish is for this bloodshed of brothers to stop. Stating that everyone who dies in this conflict is each a Turkish child and citizen, Bayik went on to say, "Just like how soldiers and the police are our children as are the PKK children of this public. They didn't come from anywhere else. The organization leader Cemil Bayık is my son; he left us and went up to the mountain. When I hear the news of soldiers killed my heart breaks."

Bayık also spoke out against the PKK referring to Kurds that join the AK Party as traitors. "When weapons don't talk and in environments without death, everyone can freely practice politics. I became a member of the AK Party, because I found their work to be successful. I work at the toll booths during elections in order to ensure nobody steals their votes. Stating that a general amnesty could result in the PKK relinquishing their weapons, Bayık states, "I am not calling for this because I have a son named Cemil. He died for us years ago," said Bayık who explained that they only knew he was alive from television reports.

"The Prime Minister needs to develop a formula as soon as possible in order to put a stop to the deaths. Of course speaking with Öcalan and Bayık is not possible; however the public's reasonable demands could be met. If a television station such as TRT-6 had been allowed years ago, then this situation wouldn't have escalated to this degree. Our villages now have water, electricity, canalization and roads. Kurdish can freely be spoken and Kurds can become President. I believe that our party leader and Prime Minister Erdogan will solve the Kurdish issue. The government is extremely strong, they may not have this same opportunity at the next election and therefore they need to solve the issue immediately."