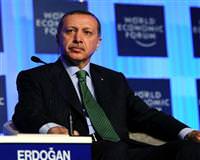 Speaking at the opening of the World Economic Forum's Middle East, North Africa and Eurasia summit meeting, Prime Minister Recep Tayyip Erdoğan expressed how pleased he was that the 'Bridging Regions in Transformation' forum was being held in Istanbul.

During his address, Erdoğan stated "Turkey is in the center of an extremely challenging democracy. Despite all of the difficulties and problems, this is a country that has strongly preserved its position of being an island of trust, despite all of the ongoing issues in its surroundings.

Prime Minister Erdoğan also touched upon Turkey's economic success by stating, "Even if during the 2009 economic crisis there may have been a slight regression, all of our economic indicators have now surpassed the levels they were at prior to the crisis. Underlining the fact that Turkey did not sign a deal for an IMF loan during the global crisis, Erdoğan points out that, "by April, 2013 Turkey's IMF debt will have been completely zeroed out.".

Stating that in a globalized world, every country's problem is also a global one, Erdogan said "As the world becomes globalized, so should human values, democracy, human rights and liberties also become globalized. As the world turns into a global village, conscience should also become globalized. Underlining the fact that one country's problems closely affect other nations, Erdoğan stated, "War, conflict, emigration, terrorism are all factors that directly affect neighboring nations. As Turkey, we need to take an initiative when it comes to regional issues. The fact that we raise our voice on certain issues should never be misconstrued as intervening in internal affairs."

Prime Minister Erdoğan went on to state, "We have never had any intentions of interfering in the internal affairs of nations surrounding us, nor in distant countries. However, we wholeheartedly support an extremely comprehensive viewpoint. We say that every nation's stability, welfare, peace and harmony is connected to the, stability, peace and harmony in the entire region."

A helping hand is not extended to underdeveloped countries

Erdoğan also mentioned that developed nations are not extending enough help to underdeveloped nations. "Although they say they are extending a helping hand, unfortunately they consider the fees they pay rapporteurs who go to these countries as aid. There is no such thing."