Turkey’s profile is on the rise 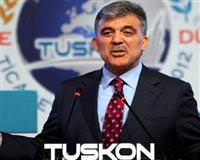 President Gül states, “Turkey has become increasingly more recognized in the international arena. One of the main reasons for this is the country’s active foreign policy.”

Speaking at a 'Turkey-World Trade Bridge 2012' gala dinner held by the Turkish Confederation of Businessmen and Industrialists (TUSKON) at the Wow Hotel in Istanbul on Tuesday, Gül began by thanking TUSKON for organizing the event as well as extending his gratitude to the Turkish Exporters Assembly (TİM) and the Ministry of Economy.

President Abdullah Gül went on to state, "I would like to see Turkey's function as a bridge, which is part of this meeting's title, to be fulfilled. I would like for you all to get to know Turkey well. I am sure you see Turkey in the press and in the media. Turkey's international profile has been on the rise in recent years. Turkey's position is constantly inquired not only for issues in the region but also in the international arena. Turkey has become a country that people ask about; questioning what Turkey thinks and says on issues. One of the main reasons for this is Turkey's foreign policy. We are exerting significant efforts to maintain strong relations as well as to further develop them."

TURKISH AIRLINES FLIES TO NEARLY EVERY CAPITAL IN AFRICA

President Gül also went on to mention the importance of Turkish Airlines' expansion of destinations by stating, "Of course, you will most likely transport goods by shipping, or via highways or railroads, however in order to sign agreements and to select products you will be going by plane. You will be travelling in order to better get to know one another. In order to facilitate this process, we have given direction and offered a certain perspective. That is to fly wherever you can fly, but make sure there is feasibility. Turkish Airlines now practically flies to every capital in Africa. If I were to say that THY is the sole foreign airline to fly to Somalia that would suffice. Therefore, everyone must come to Istanbul. In this sense, Istanbul truly becomes a capital that connects all other centers. If you want to go anywhere, the closes route is always through Istanbul. From this perspective, Turkish Airlines and of course our other airline firms contribute greatly to Turkey's foreign and economic policies."

President Gül also brought up the humanitarian work that Turkey has embarked on, by stating, "Turkey has now entered the U.N.'s donor club. Turkey's humanitarian-based spending, including state and civil society organizations, now surpasses two billion dollars. This is a service we do, without expecting anything in return," expressed Gül.