PM Erdoğan: We will work in collaboration with the opposition 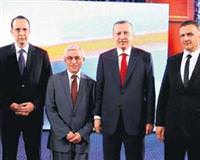 Prime Minister Erdoğan commented on his recent meeting with CHP leader Kılıçdaroğlu by stating, “My biggest wish would be for this situation to continue. I have no biases. Let’s take a concrete step on this issue together. "

Prime Minister Tayyip Erdoğan received the leader of the Republican People's Party, or CHP, Kemal Kılıçdaroğlu in a meeting in Ankara to discuss the opposition views on the fight against terrorism in Turkey. Responding to questions from a number of newspapers' editor-in-chief's in a simultaneous broadcast on atv and ahaber, Erdoğan referred to the package presented by CHP as 'an evaluation and diagnosis, more so than a proposal'.

OUR PROPOSAL: The Prime Minister went on to explain that he offered another proposal. "I said, let me make another suggestion. As CHP and AKP, let's come together to work on the issue. The MHP and BDP are not positively engaging the matter so let's begin working together as the main party in power and the main opposition. Let's see where we are lacking as the government in power and let's try to eradicate the situation."

(In response to a question on the new CHP) My greatest wish is for the situation right now to continue and become stronger. That's why I made that suggestion. In fact, we should be doing the same thing on a number of issues. If the party in power begins working with the main opposition and we are able to collaborate, then the remaining opposition parties will understand they are in error. How could it not work if we are sincere? I have no biases and no postulations. Let's take a concrete step together on this issue."