'We will not recognize Southern Cyprus’ EU term presidency’ 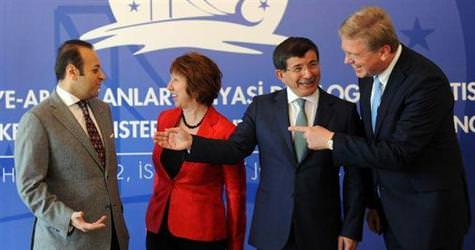 Speaking to the press following the meeting, the two Turkish ministers expressed Ankara's determination when it comes to the EU. However, although Ankara is eager to revive the EU negotiations process, Turkey has expressed that they will be ceasing relations with the EU term presidency for the six months when Cyprus takes over on July 1st.

During the joint press meeting, Davutoğlu stated, "The relations and contacts with the EU will continue, but none of the Turkish Republic's ministries or any institutions will be in contact with the EU presidency in any of the activities related to the Greek Cypriot presidency."

Davutoğlu also brought up the issue of visa exemption for entry to EU nations during the meeting and emphasized that it was a belated right for Turkish nationals.

EU Minister Bağış expressed that Turkey is determined to continue on the EU negotiation path and that taking a step back was not an issue. Bağış also paid reference to former President Nicolas Sarkozy without actually naming him by stating, "There are politicians within the EU that may be narrow minded who feel that they can place obstacles in front of Turkey. We all see however that those same individuals are forced into retirement and are sent on vacations by their own citizens."

Meanwhile, Turkey and the EU have not opened a chapter over the past three term presidencies. The earliest a new chapter will be opened is slated to be in the first half of 2013.