Kurdish to be offered as an elective, says Erdoğan 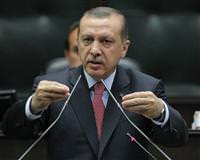 Speaking at an AK Party group meeting, Erdoğan stated, “Our students are finally being given the opportunity to learn their own regional language and dialects. Kurdish will also be made available as an elective course when there are a sufficient number of students to take the class. This is a historical step.”

"In Turkey, certain options had been crossed out; however we have erased those lines. We are not pushing anyone to attend religious or vocational schools. We are not forcing an elective Koran course on any student or any parent. Quite the contrary, we are now opening up the options that were previously blocked. We are placing the freedom of choice and of preferences before our nation."

Erdoğan went on to explain that according to the new class layout, students will now be given the opportunity to learn their own regional languages and dialects in school. "For example, when there are enough students that come together, they will now be able to take Kurdish as an elective course. Kurdish will be taught and learned in class, this is a historical step."

Explaining that they have based the new education regulations on extensive research of international and EU standards, Erdoğan went on to explain that they have now made Koran classes elective. We are also presenting the option of an elective 'basic religious studies' course. This course will also be available on a variety of religions. For example, if Christian or Jewish students choose, they will be able to learn about their own religions. In addition to the mandatory foreign language courses offered to high school students, if desired, students will also be able to take elective courses in additional foreign languages."