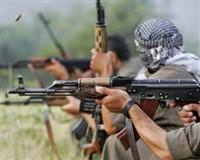 Members of the PKK terrorist organization have been forced out of their cave-dwelling shelters due to the ongoing number of operations by security forces and are now seeing signs of widespread health problems.

Information obtained from wireless communication within the PKK has revealed that the terrorist organization is currently in a state of panic due to an illness epidemic having surfaced amongst members.

With a series of operations staged by Turkish security forces, the former cave safe havens the PKK used to retreat to have now been uncovered. As a result of having no shelter or supplies it appears the overall health of members of the terrorist organization, seems to be waning, while an epidemic illness is now on the rise.

A call for help from one of the PKK's regional heads to the organization's Kandil headquarters was harshly responded to by a high-level PKK official who stated that they did not want to hear anything in connection to illnesses. Supposedly he did not want PKK commanders to receive knowledge that an epidemic was on the rise amongst PKK members. In fact, after the announcement that organization members were seriously sick and the illness was now spreading to everyone and they were waiting for emergency aid, the following day a direct order was made from Kandil that none of the organization's regional administrators ever mention anything in connection to illness again.
According to the information obtained, having been left to their own devices, a number of terrorist members have disregarded Kandil's orders and are trying to receive treatment in the city center, while others have chosen to completely abandon the organization.

Female terrorists have it the worst

In the most recent operation staged by security forces on PKK enclaves in Mount Cudi, medical materials were confiscated from the terrorist organization. PKK members who surrendered were not only sick themselves, but also explained that a number of members were suffering the same illness however high level PKK officials were hiding this fact.

The PKK member explained that even though they have been trying to access medical supplies through militants that go to the city, the supplies are not enough and they are in dire need of emergency care.

The surrendered PKK members explained that the women members seem to be the most susceptible to the epidemic and that the leader of the female PKK wing YJA-STAR has requested they be immediately evacuated from the region, however to no avail.