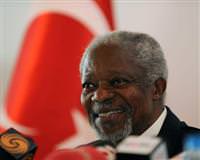 Turkey has decided to participate in a contact group meeting geared towards implementing a six item plan for a solution in Syria proposed by UN and Arab League Special Envoy Kofi Annan.

While the United States has announced that they will not be attending the meeting if Iran is present, Turkey's Minister of Foreign Affairs Ahmet Davutoğlu will be heading out to Geneva to represent Turkey in the June 30th meeting. How the West will respond to Anna's proposal will most likely be established during the G-20 summit. The resemblance to a conference and its participants held by Russia has resulted in igniting reactions by the West in regards to participating in the meeting called on by UN and Arab League Special Envoy Kofi Annan. There still remains the question of whether or not a number of nations, including the EU, will attend the meeting. Meanwhile, Saudi Arabia and Qatar from the Arab League are also opposed to Iran's participation.

Annan's proposal has not yet fulfilled Ankara's request to clearly establish how the objective and its supervision will be implemented.

From here on out, Turkey would like the Post-Assad era in Syria to be openly discussed and shaped. Prior to the Annan meeting, the Syrian National Council has also taken a look at the road map established. Syria's National Council will be meeting in Cairo from June 24th to the 26th and will also be attending the Friends of Syria Group meeting scheduled for July 6th in France. It is highly anticipated in the Paris meeting that the Friends of Syria Group will be cutting all ties with Assad and officially recognizing the Syrian National Council as Syria's sole official representative.