An early return from Rio 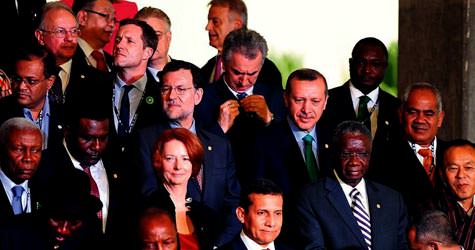 Prime Minister Erdoğan has decided to return home from his trip to Brazil this evening. During his visit, which was scheduled to run until Saturday, Erdoğan attended the opening of a summit on sustainable development in Rio and also met with French Prime Minister Hollande.

Prime Minister Tayyip Erdoğan has decided to cut his trip to the Brazilian capital of Rio de Janeiro two days short due to the PKK attack in Dağlıca, which transpired earlier this week.

Erdoğan arrived to Rio from Mexico in order to attend the Rio+20 Sustainable Development Summit. Prime Minister Erdoğan was scheduled to return to Turkey on Saturday, June 23rd, however in the end he moved his departure up to this evening, Thursday, June 21st. As a result a scheduled meeting with Brazilian President Dilma Roussef was instead turned into a breakfast meeting between the two leaders.

During this trip, in which Erdoğan is accompanied by six state ministers, Turkey and Brazil will be signing a number of agreements intending to increase trade volume between the two nations. Accompanying Prime Minister Erdoğan is Deputy Prime Minister Ali Babacan, Minister of Finance Mehmet Şimşek, Minister of Environment and City Planning Erdoğan Bayraktar, Minister of Development Cevdet Yılmaz and Minister of Forestry and Water Works Veysel Eroğlu.

With over 100 state and government leaders in Brazil to attend the summit, Prime Minister Erdoğan was one of the exclusive state leaders reserved to stay at the largest hotel in Rio. Throughout the summit, the hotel will be heavily safeguarded from the air by helicopters and by a significant number of soldiers on land. Also for the duration of the summit, transportation is being provided by environmentally-friendly hybrid vehicles.

Upon Erdoğan and his accompanying committee's arrival, intensive security measures were put in place by way of low-flying helicopters tracking their arrival. At the hotel, Brazilians greeted the Prime Minister by stating, "Merhaba Galatasaray". Later, Erdoğan attended the opening session of the United Nations' Rio+20 Sustainable Development Conference.

Today, Erdoğan is scheduled to address the Rio+20 Summit as well as to participate in a session entitled 'Least Developed Nations and Rio+20'. Rio de Janeiro, which hosted the first ever Environment and Development World Summit in 1992, was selected as the destination for the Summit's 20th anniversary. Considered to be the most important global meeting on sustainable development, the Rio+20 is being hosted by Brazilian president Dilma Roussef and U.N. Secretary General Ban Ki-moon, who will be working to promote the acceptance by state leaders of a 26-item action plan divided into the topics 'sustainable energy', 'education', 'food security', 'water security' and 'oceans'.

By the end of the summit, it is hoped that a roadmap to promote the growth of 'green economy' geared towards promoting the environment, will be established in addition to the determining of a corporate framework to establish nations' sustainable development objectives.

A series of workshops and themed sessions will be held throughout the Rio+20. Over 60 sessions alone will be held on topics including 'energy and climate', 'agriculture and food', 'water and ecosystems', 'social development', 'urbanization and cities' and 'sustainable development economy and financing'.