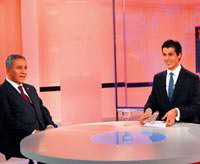 While Arınç called on Barzani and the BDP to do more in the fight against terrorism, stating “We are expecting more from you”, Barzani thanked Prime Minister Erdogan for his efforts and stated, “The era of using weapons is over”.

During a launch ceremony for a new broadcast on TRTŞEŞ in Sorani, a dialect of Kurdish, Deputy Prime Minister Bülent Arınç met onscreen with President of the Iraqi Kurdish Region Massoud Barzani, who called for the PKK to drop their weapons. Barzani, joined in on a live broadcast and commented on Tuesday's terrorist attack in Hakkari by stating, "Yesterday's incident deeply saddened us. The era of war and using weapons is over." Barzani also thanked Prime Minister Recep Tayyip Erdoğan for the steps he has taken to solve the Kurdish issue. Condemning the attack in Dağlıca, Barzani went on to state the following:

"The era of using weapons is now over. This situation harms the Kurdish people even more. Our stance is extremely clear and obvious. We also share our position with our brothers in Turkey. We want them to continue the action taken in parliament. The steps taken recently are very significant steps for Turkey. I condemn this attack. It will definitely never reap results for them. I want to extend my gratitude to Mr. Prime Minister for the steps taken. I also want to thank those from other parties who have also proposed suggestions for a solution."

Deputy Prime Minister Bülent Arınç stated, "We are people from the same geography. We all need to stand up against those who want to break this brotherhood." Expressing that they are expecting Barzani to take further steps and contribute more, Arınç went on to state: "We recognize and will continue to recognize all of the God-given rights of our compatriots in Turkey whether they are Kurdish and of varying ethnicities, in our efforts towards democratization, in the constitution and through all forms of human rights agreements. Most recently, the main opposition party has made an initiative on the issue. MHP says they will not accept it. The Prime Minister however has written an open check by way of stating, even if they say no, we will reach an agreement. Additional steps may be taken upon his return."

After the program, Arınç provided the following statements in response to questions asked:
"In recent years, relations between our government and Massoud Barzani have reached a good point in terms of security. However, we want them to be more effective. Barzani says that these attacks which harm Turkey are exceptionally wrong and damned, and I believe it from my heart."

(To the BDP) "A political party which is practically intertwined with the organization's activities needs to not make do with simply making requests. "If they say for God's sake, that's enough already" we are expecting them to say more. The Turkish public expects the BDP and its chairman to announce that they condemn the attacks and no longer have any contact with the organization."

(Öcalan) "It is not legally possible for him to be given house arrest today. This is because it doesn't seem probable that an individual who has been sentenced to aggravated life imprisonment could then benefit from probation. The Prime Minister states, 'If the organization drops their weapons, then we will stop operations.' In any case, they will relinquish their weapons. There is no other choice."