‘All we need is a global conscience’ 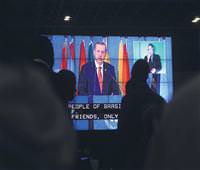 Calling on world leaders to create a global conscience, Prime Minister Erdoğan, says, “No one can evade responsibility in a world where children are being murdered.”

During an address at the United Nations Sustainable Development Conference and Rio+20 Summit, Prime Minister Tayyip Erdoğan called on the U.N. nation leaders to help create a 'global conscience'.

Prime Minister Erdoğan began his address by stating, "We did not inherit a world like this from our ancestors. Unfortunately, if measures are not taken now, we will be unable to leave behind a better world."

Prime Minister Recep Tayyip Erdoğan criticized greed, rapacity, selfishness and unlimited consumption in a speech in which he reminded, "Meanwhile, there are significant masses that spend days and even weeks without even having a bite to eat."

The following are a number of excerpts from Erdoğan's emotional address"

YOU CANNOT EVADE RESPONSIBILITY: "You can well appreciate that in a world like this every global problem is a responsibility or as it were a sin, for everyone that claims they are a human being. Some nations may be able to continue living their lives with a wall built around them indifferent to the rest of the world. Even if this sort of egocentrism provides these nations with prosperity today; their children and their grandchildren and the generations of the future will undoubtedly be extremely negatively affected. No one can evade responsibility in a world where children are murdered. No one can escape accountability in a world where women and civilians continue to be ruthlessly killed."

YOUR GRANDCHILDREN WILL COME TO FIND YOU: "Nobody has the luxury to turn their backs to these tyrants and remain unresponsive and silent. Those who continue to remain unresponsive to the problems that threaten our world today should be well aware that sooner or later their children and grandchildren will come after them."

THE FOREST OR CHILDREN?: "Of course we are going to protect the rain forest, the dolphins and seals as well as preserve the eco system in the best way possible. However, those who do not acknowledge the victims; Syrian women, innocent Afghanis, Africans and Somalis, will, by losing their own conscience, be allowing everything that belongs to this world to be destroyed."

ERDOĞAN: OUR DOOR IS OPEN TO SYRIA
Speaking at a session on 'Least Developed Nations' with UN Secretary General Ban Ki-moon, Erdoğan announced that the number of Syrian refugees has now reached 31,000. "Our door is open and we are obliged to accept however many people come, because we consider this to be a humanitarian issue."
Prime Minister Erdoğan went on to explain that the aid Turkey supplies to least developed nations will reach ten billion dollars by the year 2020. He also called on the international community to fulfill the commitments they make to the world's least developed nations.