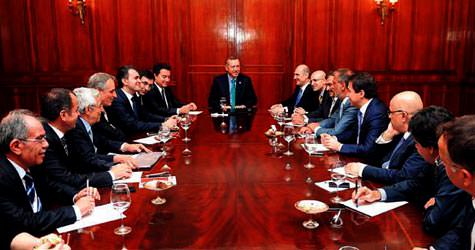 Responding to questions posed by the Turkish press while in Brazil, Prime Minister Erdoğan expressed that it was crucial the PKK relinquish their weapons, and stated, “The moment the PKK drops their weapons, it will no longer be an issue for security forces to continue operations.”

Responding to questions posed by the Turkish press while in Brazil, Prime Minister Erdoğan expressed that it was crucial the PKK relinquish their weapons, and stated, "The moment the PKK drops their weapons, it will no longer be an issue for security forces to continue operations."

The PKK seems to stage attacks when you are engaged in an intensive foreign policy program. This latest attack transpired while you were attending the G-29 summit. Will it be possible to reach a solution by 2015 when Turkey hosts the G-20 summit?

"It is impossible to provide a specific date, however if the separatist terrorist organization drops their weapons before 2015 then it may be a possibility. The co-chair of BDP says. 'The PKK should drop their weapons and the Turkish Armed Forces should stop operations.' The moment the PKK drops their weapons, it will no longer be an issue for security forces to continue operations. However, they shouldn't wait for our security forces to stop using weapons, because their own instruments are also weapons… Furthermore, weapons are not only used against the separatist terrorist organization, but they are also necessary to maintain public order. Over the past few days we have lost eight soldiers in the line of duty and 26 terrorists have been rendered ineffective. Truthfully, we do not want any of this. However, when we lose eight of our own soldiers, it is not possible for our security forces to remain with their hands tied behind their backs. Our public has expectations and our General Staff and our Armed Forces commanders go out to the region and reap results."

You have said that there are internal steps to be taken and if necessary you will take those steps. Is this the expression of a new perspective on reaching a solution?

"What I am saying is that we need to see it for ourselves. We need to see them drop their weapons and we will not take any steps until we do so. We have had so many different approaches geared towards this issue…"

Is the dropping of weapons a prerequisite?

"Yes, it is a prerequisite. Citizens are threatened when they vote and threatened for extortion. Our provincial and district chairmen are kidnapped and even killed. However, I can proudly say that none of them and not even their families are backing down."

Is an international consensus developing regarding reaching a solution?

"Barzani has been extremely clear and he is influential in the Kurdish region. He wants the PKK to drop their weapons. Nechirvan comes to us saying the same thing. We need to keep our relations with Northern Iraq strong, which upsets both the PKK and the BDP, however we will continue."