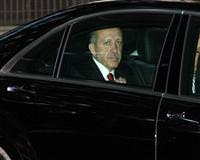 An announcement released following the Security Summit chaired by Prime Minister Erdogan confirms that the Turkish warplane that went missing earlier today was in fact shot down by Syria.

Following the Summit an announcement was released stating that Syria was responsible for shooting down the Turkish fighter jet that went missing after taking off.

Search and rescue efforts continue for the two pilots aboard the F-4 jet as well as in order to locate the missing aircraft. The announcement also noted that Syria is also participating in search efforts.

The announcement also stated that the steps Turkey will take next and its conclusive stance will be determined as developments ensue and details of the incident are revealed.

All communication was lost with a Turkish military plane in the southwestern region of Hatay earlier today as Syria joins Turkey in search and rescue efforts to locate the jet. Meanwhile, Prime Minister Erdoğan, who has cut his trip to Rio short to return to Turkey today, will be holding a Security Summit this evening, where he will be joined by the nation's highest-level state and military members.

Turkey's General Staff released an announcement that search and rescue efforts have begun for the warplane they lost contact with at 11:58 a.m. on Friday after its 10:30 am takeoff from Malatya's Erhaç airport. Two crew were aboard the F-4 jet, Turkish state news agency Anatolia said, citing Malatya governor Ulvi Saran.

Once communication ceased with the pilots, search efforts were initiated in order to determine the location of the fighter jet. Syrian vessels have now joined the search working alongside Turkish vessels and helicopter to locate the aircraft. According to the information obtained, the plane went down eight miles into Syrian territorial waters. No official announcement has been made as of yet regarding the cause of the crash; however speculation has surfaced throughout the day in the foreign press that Syrian forces may have brought down the Turkish warplane. Other allegations involve claims the pilots have been taken hostage.

Prime Minister Recep Tayyip Erdoğan, who has returned to the capital today, cutting his trip to Brazil to attend the Rio+20 short, will be holding a Security Summit in the Prime Ministry in Ankara this evening. Erdoğan will be joined by Chief of General Staff Necdet Özel, Minister of the Interior İdris Naim Şahin, Foreign Affairs Minister Ahmet Davutoğlu, National Defense Minister İsmet Yılmaz and National Intelligence Organization (MİT) Undersecretary Hakan Fidan.

Speaking at a press conference held at Ankara's Esenboğa Airport upon his arrival, Prime Minister Erdoğan stated that further details on today's crash will be released following this evening's Security Summit.

"I CANNOT SAY FOR SURE OUR PLANE WAS SHOT DOWN"

Although speculation has surfaced in the press that Syria shot down the Turkish warplane, Prime Minister Erdoğan expressly stated during the press conference that he could not say for certain that Syria had brought down the plane. The Prime Minister went on to state that details will be further clarified during this evening's Security Summit. Responding to a series of questions Erdoğan did express that it is being said the plane went down eight miles into Syria's territorial waters.

Erdoğan also clarified that the pilots are not being held hostage and stated that Syria has joined Turkey in its efforts to locate the plane and recover the pilots. In response to a question regarding allegations that Syria has apologized for shooting down the aircraft, Prime Minister Erdoğan stated that he had no precise information yet that Syria has issued an apology. Erdoğan went on to state, "If they have issued an apology, then what is that apology for, we do not yet know for sure." Erdoğan also said that they have no information regarding the condition of the pilots and sufficed to say that they will be releasing detailed information following tonight's Security Summit.