A weird defense from Syria 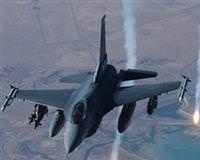 Syria’s Ministry of Defense has released an announcement revealing they shot down the Turkish warplane that went missing yesterday over the Mediterranean.

The announcement from Syria states, "Syrian forces detected an aircraft that had crossed into the Syria border by a kilometer. The plane, which had violated the border, was opened fire on by anti-aircraft batteries. The location where the plane was brought down was ten nautical miles' distance. We realized it was a Turkish plane only after we shot the target."

Syria said the Turkish aircraft was flying low, well inside Syrian territorial waters when it was shot down.

President Abdullah Gül has also spoken out regarding Syria shooting down a Turkish fighter jet. President Gül said on Saturday it was not possible to ignore the fact that Syria had shot down a Turkish fighter jet and said everything that needed to be done following the incident would be done. "We have not yet clarified our stance on the downed plane, because there could be heavy consequences.
With the second biggest army in NATO, a force hardened by nearly 30 years of fighting Kurdish terrorists, Turkey would be a formidable foe for the Syrian army which is already struggling to put down a 16-month-old revolt.

But Prime Minister Tayyip Erdoğan's initial comments and subsequent statement on the downing of the F-4 jet were measured in tone. He said Turkish and Syrian forces were working together to search for the two missing crew of the aircraft.
"As a result of information obtained from the evaluation of our concerned institutions and from within the joint search and rescue operations with Syria, it is understood that our plane was brought down by Syria," Erdoğan's office said in a statement.
"Turkey will present its final stance after the incident has been fully brought to light and decisively take the necessary steps," the office said after a two-hour emergency meeting between prime minister, the chief of general staff, the defense, interior and foreign ministers, the head of national intelligence and the commander of the air force.