A historical announcement from Davutoğlu 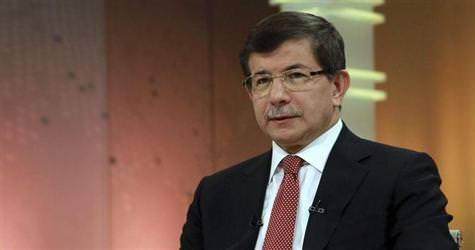 Turkish Foreign Minister Ahmet Davutoğlu, speaking some 48 hours after the jet was shot down near both countries' sea borders, told state broadcaster TRT the plane had been clearly marked as Turkish and dismissed Syria's earlier statement it had not known the plane belonged to Turkey.

He said the downed jet was unarmed and had been on a solo mission to test domestic radar systems and that the flight had no connection to the crisis in neighboring Syria.

"Our plane was shot at a distance of 13 sea miles from Syria's border in international airspace," Davutoğlu said. "According to the radar images, our plane lost contact with headquarters after it was hit and because the pilot lost control, it crashed into Syrian waters after making abnormal movements," he said. "Throughout this entire period no warning was made to our plane." Reiterating that the downed aircraft was conducting a test and training flight, Foreign Affairs Minister Ahmet Davutoğlu went on to state, "To derive any sort of threat from this type of flight is either a result of ulterior motives or is a completely amateur approach."

Noting that Turkish ships and helicopters are currently searching for the pilots of the downed plane, Davutoğlu offered his wishes that the family members of the pilots remain patient and resolute at this time."

Explaining that all officials have been trying to remain level-headed and act systematically in crisis-managing the incident, Davutoğlu stated that they were informed shortly after contact was lost with the aircraft at 11:58 and immediately informed Syria.

Syria has said the plane was flying fast and low, just one kilometer off the Syrian coast when it was shot down. It had been tracked at first as an unidentified aircraft and its Turkish origin established later.
Davutoğlu dismissed Syria's explanation, saying the plane's identity was clear for all to see and said Damascus was transmitting "disinformation" to the Turkish public.

He said the downed jet had briefly crossed into Syrian airspace and that Turkey sent a warning that it was on the wrong route and it immediately exited Syria's air space 15 minutes before it was shot down, but had received no warning from Syria. He said such flights often cross into other countries' airspace.

Davutoğlu went on to state, "We will not take any impulsive steps. We will also not take any action based on misinformation. We ill first gather all of the data, we will determine the true basis of the incident and then we will act decisively."

Davutoğlu requested that all nations that have imagery or information on the incident to please share it and stated that Syria was releasing disinformation.

Davutoğlu said that they would be evaluating the situation tomorrow with the Council of Minister and that Turkish Prime Minister Tayyip Erdogan would make a statement at his ruling party's meeting in parliament on Tuesday, the foreign minister added. He said Ankara had begun to implement its response to the incident, but gave no details of the plan.

"I have made instructions for a notification to be made within the framework of Article 4 at the NATO Council meeting in the upcoming week," Davutoğlu said.

"In addition, a notification will be made to the U.N. Security Council in light of the information we have regarding the background to this aggressive attitude," he said.

NATO's article four provides for states to "consult together whenever, in the opinion of any of them, the territorial integrity, political independence or security of any of the parties is threatened".

It stops short of the explicit mention of possible armed responses cited in article five.

The Situation in Syria
Noting that any administration that is not at peace with their own public will also not be at peace with neighboring nations, Davutoğlu stated, "We shouldn't make any sort of direct connection between this incident and the developments in Syria. If the developments in Syria had taken a different route, we would have still embraced the same stance."

Davutoğlu said, regardless of what transpires as a result of this incident, Turkey will continue to stand by the Syrian public until an administration which is reconciled with the public takes over and will use all diplomatic and political means to do so.

Explaining that no matter what steps they take, they will do so in a manner ensuring that the Middle East that they conceive of will not be harmed. "Our conception of the Middle East region is of a reservoir of peace consisting of mutual economic interaction, intensive cultural communication and political dialogue."

Davutoğlu requested that citizens maintain their trust in the government and state and stated, "It is important for our public to know that we will only take measures in a manner ensuring we avoid all risks, however protect our national interests and pride."