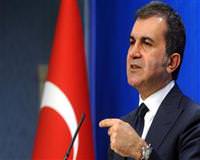 Commenting on Syria’s downing of a Turkish fighter jet on Friday, AK Party’s Vice Chairman in Charge of Foreign Affairs Ömer Çelik says with this strike, Syria has attacked the international community, international law, countries of the region, international legitimacy and NATO.

Vice Chairman of AK Party in Charge of Foreign affairs Ömer Çelik released a series of messages through his Twitter account expressing his sentiments regarding Syria's downing of a Turkish F-4 jet.

Çelik went on to explain that the public should "Rest assured" because Turkey has a clear and comprehensive road map. "This road map was drawn right after the incident in a meeting chaired by PM Erdogan," says Çelik.

"It is very important that Turkey has always approached the Syria issue based on legitimacy and the rule of law. Syria shooting down our plane is not just a matter between Turkey and Syria but also between the International community and Syria, as well as between NATO and Syria."

Çelik went on to state that this action on behalf of the Syrian regime goes against all of the dynamics of international law, and that all of the data collected thus far on the incident, confirms this fact.

Expressing that Turkey's pressing immediate concern is locating the missing pilots, Çelik states "We have reached a new stage with this incident. However, all of our priorities at present lay with finding out the whereabouts of our pilots.