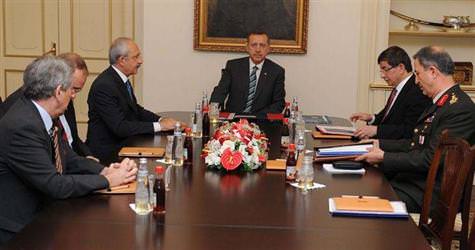 Prime Minister Erdoğan met with leaders from the main opposition yesterday for a briefing on Syria’s downing of a Turkish F-4 jet on Friday.

Foreign Affairs Minister Davutoğlu, Deputy Chief of General Staff Hulusi Akar and Turkish Air Force Chief of Operations İrez were also in attendance for a rarity experienced by Ankara in which a series of 'state summits' were held between the party in power, the main opposition and the military.
Prime Minister Tayyip Erdoğan held a series of meetings yesterday at the Prime Ministry with leaders from parties with seats in the parliament in order to relay first hand information obtained following Syria's downing of a Turkish F-4 jet on Friday. Erdoğan first met with Republican People's Party (CHP) leader Kemal Kılıçdaroğlu and later with Nationalist Movement Party (MHP) leader Devlet Bahçeli followed by Peace and Democracy Party (BDP) Co-Chair Selahaddin Demirtaş.

After briefing party leaders on the developments, Erdoğan asked each party leader the same question: "This is the situation, what are your views and suggestions?" Major General Mehmet İrez was in charge of presenting all technical information on the issue. Erdoğan used maps and conducted a laser assisted presentation which also periodically involved cinevision.

The first 'state session' was held with CHP leader Kemal Kılıçdaroğlu, who was accompanied by CHP's Istanbul Deputy and retired Ambassador Osman Korutürk and CHP Vice-Chairman Faik Öztrak. During the meeting with CHP, which lasted an hour, the CHP leader expressed that the attack "was unacceptable". Following the meeting, Kılıçdaroğlu departed for the CHP Headquarters to brief fellow CHP staff on the details discussed.

THE LONGEST SESSION WAS HELD WITH BDP

The final 'state summit' was held with BDP Co-Chair Selahaddin Demirtaş and BDP Vice-Chair Gültan Kışanak. This meeting marked the first time the BDP has met face to face with high-level military representatives. The meeting, which lasted an hour and ten minutes, was the longest session held yesterday by Prime Minister Erdoğan.

MHP offered their support for the government's policy followed since the plane was brought down. Prime Minister Tayyip Erdoğan said to MHP leader Devlet Bahçeli, "If you have any questions please ask. I also want to hear your views on the issue." Bahçeli responded by offering his party's conditional support. Bahçeli went on to state: "The government should continue to pay attention to the sensitivity of relations developed up until now with countries in the region. In terms of assessing the situation, MHP will always offer support when it comes to national interests. However, first of all what needs to be done should be done so diplomatically. The sensitivity of the region and the dynamics of relations in the region should not be ignored. Apart from that, MHP's stance when it comes to national interests is clear. We will provide our support at the point it is needed."