Turkey to open fire without warning 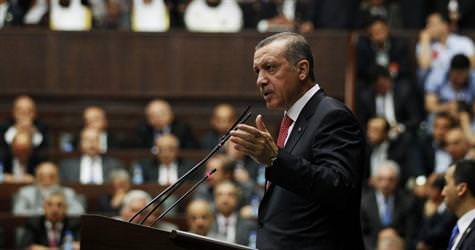 Along with the new road map for dealing with Syria as announced by Prime Minister Tayyip Erdoğan at yesterday’s AK Party Group Meeting, Turkey will now also be assigning soldiers guarding the border to be on 24-hour alert.

Announcing Turkey's new road map geared towards Syria, Prime Minister Erdoğan stated, "Turkey's rules of engagement have changed. We will respond to every violation by Syria on our border." Ever since Erdoğan's announcement all eyes have now been directed towards how the Turkish Armed Forces (TAF) will respond to any form of aggravation to come from Syria. According to Erdogan, TAF will now respond by opening fire on any military element belonging to Syria that approaches the Turkish border.

According to the former rules of engagement, in past violations by Syria the Turkish Armed Forces would suffice by providing a warning. Any military personnel, vehicle or aircraft that approached the border by land, air or sea, would be closely tracked in order to determine whether the approach was hostile. If it was decided that it posed as a threat, a warning was then issued to ensure they did not cross the border.

According to regulations on legitimate self defense, opening fire was not permitted until the border was actually violated. However, according to the new road map, any form of military threat that comes in from the border will be responded to with open fire without warning. Any form of military element belonging to Syria will indiscriminately be fired upon by Turkish forces upon its approach to the border. A new engagement system is being tested in which the scope of sanctions to be issued in response to a threat will be determined hierarchically according to the quality of the threat. For example: In any sort of air field violation, according to the rules of engagement, responding to planes with open fire is forbidden. The aircraft is first issued a warning and should the violation persist then Turkish planes will take off in order to engage in a dogfight in order to jam the opposing aircraft's weapons system. The final step would be to open warning fire.

SELF DEFENSE
According to the new road map, any sort of military threat coming from Syria will now be responded to within the framework of self-defense regardless of the previous rules of engagement.