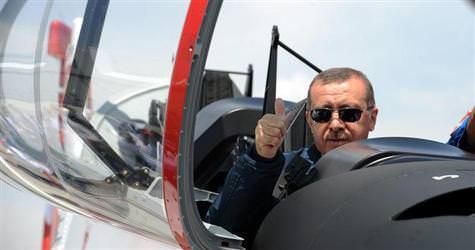 Prime Minister Erdoğan continued to release a series of statements slaying Syria for recently striking a Turkish fighter jet. "Growing states tend to have enemies. We will put anyone who tries to test our might and any gang-run states in their place."


Prime Minister Recep Tayyip Erdoğan was speaking at a ceremony held for the release of 'Turkey's Starter and Basic Training Aircraft' from the Hanger at the TAI TUSAŞ Facilities. The introduction of the FREE BIRD (HÜRKUŞ), the Turkish Aerospace Industry's (TAI) first-ever domestically produced training jet, coincided with Aviation and Aerospace Day.

Prime Minister Erdoğan devoted a significant portion of his address to the situation with Syria. Erdoğan maintained his harsh stance against Syria after it downed a Turkish F-4 jet last Friday, while also emphasizing that Turkey has absolutely never harbored intentions on another nation's land.

Noting that Turkey has never acted hostile to another state and has also absolutely never threatened the security of any nation, Prime Minister Erdoğan expressed that the Turkish state is one that other world states can depend on.

"We will never hesitate to respond to hostile attitudes against us, attacks and threats in the strongest manner possible using all the power and inspiration derived from our history. We are a state that is currently in a merciless fight against every form of terrorist organization, illegal organization and gangs. We will never avoid teaching a lesson to gang-run states that have no legitimacy in the eyes of their public, those who resort to state terrorism against their people and those who dare to test the limits of Turkey's might."

Expressing that countries that have grown to become powerful will always have adversaries and those that are envious and can't take it, Prime Minister Erdoğan stated, "Those that perceive periodic attacks on our planes, ships, soldiers and police and our flag to be a weakness in our foreign policy are extremely lacking of a grand state vision. As Turkey continues to grow, expand and advance there are certain circles that create scenarios based on Turkey and they will continue to do so. Hopefully we will surpass all of this and stave them off. As a nation, we will all celebrate the 100th anniversary of the Republic and having advanced towards our 2023 goals to become one of the top ten nations in the world."