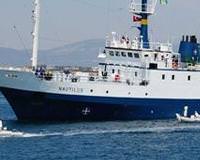 One of the world’s most important exploration ships, Nautilus has set sail to assist in the search or two missing pilots who were aboard the Turkish F-4 jet that was shot down last week.

The Nautilus has been assigned to assist in the search for the two missing pilots, Gökhan Ertan and Pilot Lieutenant Hasan Hüseyin Aksoy, missing since a Turkish fighter jet was shot down last Friday. The Nautilus will be taking off from Istanbul's Haydarpaşa Port and will reach the area where the F-4 jet was brought down within two and a half days, where it will immediately begin assisting in search and recovery efforts.

The world's most famous exploration ship, the Nautilus, worth a whopping 11 million dollars, is 65 meters long and ten meters wide. The Nautilus has 36 crew members, including scientists and is best known for locating the Titanic ship which sunk in 1912 in the Atlantic Ocean. Over the past four days now, the Nautilus has been preparing to depart Istanbul's Haydarpaşa Port to assist in locating the two Turkish pilots that have been missing since Friday.

A general in the rebel Free Syria Army said on Friday that Syrian government forces had amassed around 170 tanks north of the city Aleppo, near the Turkish border.

General Mustafa al-Sheikh, head of the Higher Military Council, an association of senior officers who defected from President Bashar al-Assad's forces, said the tanks had assembled at the Infantry School near the village of Musalmieh northeast of the city of Aleppo, 30 kms (19 miles) from the Turkish border.
"The tanks are now at the Infantry School. They're either preparing to move to the border to counter the Turkish deployment or attack the rebellious (Syrian) towns and villages in and around the border zone north of Aleppo," Sheikh told Reuters.

Davutoğlu to join international community in Geneva to deal with Syria

On Saturday, a crucial international meeting to deal with the Syria issue convenes in Geneva hosted by international mediator Kofi Annan. Foreign Affairs Minister Ahmet Davutoğlu will be representing Turkey in the ministerial meeting which Annan states aims to conclude "with an acceptable result".
But Assad on Thursday dismissed the notion of any outside solution to the 16-month-old uprising against his rule."We will not accept any non-Syrian, non-national model, whether it comes from big countries or friendly countries. No one knows how to solve Syria's problems as well as we do," Assad said.