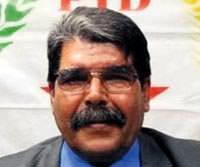 The PKK terrorist organization’s Syria wing is now under the tutelage of Assad’s agent Salih Müslüm. Syria has granted the PYD freedom to operate and is allowing the PKK to infiltrate Turkey. Meanwhile, the PKK’s Special Forces leader is also being harbored in Syria.

With tension on the rise with Turkey, Syria is now using the PKK card. The back-stage developments have been revealed with the capture of a terrorist who was in charge of PKK operations in Northern Iraq, Turkey and most recently Syria.

The terrorist, who was arrested on the border, has operated as the black box of the PKK by sharing confidential information on the connection between the PKK and Syria with Turkish security forces.
A 13-page intelligence report has been prepared from information obtained by the apprehended terrorist as well as intelligence forces on recent developments in Syria. The report along with the terrorist's file, have been sent to the Diyarbakır Special Authority District Attorney. The report states that Syrian Kurd Salih Müslüm, who also goes by the code name "Ebu Welat" was sent from the Kandil camp in Northern Iraq back to Syria, where he has since taken over the PKK's Syrian wing, the PYD.

AN AGREEMENT WITH ASSAD

According to information obtained, Müslüm had received a life sentence in Syria for petty crimes. However, following the start of the uprising in Syria, Müslüm made a deal with Assad and was released, even though he had only served for a year and a half. Müslüm joined the PKK camp and has since moved on to head the Syrian wing, the PYD. Müslüm, who is alleged to be operating as an agent for Assad, is supposedly trying to bring the Kurdish population together under the auspice of the PKK. According to the report, the Assad administration is concerned about Kurds offering support to the Arab uprising and has therefore allowed the PYD to operate freely, while border control is also turning a blind eye to PKK members entering Turkey.

Also, according to the report, the PKK training camps that were shut down following Assad's father's death, have now been reopened. The report states that there are four main camps operating in Syria where all training takes place. The report also states that over the past three months, PKK members who have undergone training in Northern Iraq are using Syrian transit points such as Aleppo, Afrin, Kobani, Derika Hemko, Amude and Haseki to cross into Hatay, Gaziantep, Şanlıurfa and Mardin in Turkey.

ÖCALAN'S GODSON IS IN SYRIA

The PKK, which is operating in coordination with Al Mukhabarat, Syria's secret service, has now sent the man supposedly in charge of Special Forces in Kandil, Ferhat Abdi Halil, who goes by the code name Şahin Cilo and who is also known to be Abdullah Öcalan's Godson, to take over the military wing in Syria.