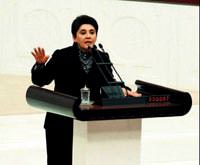 Prime Minister Tayyip Erdoğan meets with one of the most significant figures in Kurdish politics, Leyla Zana, today. The meeting will begin at 15:00 and will be held at the Prime Ministry.

Zana's comment that she believes Erdoğan will solve the Kurdish issue was responded to positively in an announcement released by the AK Party commending her on her positive approach.

Speaking at a commemoration held yesterday in honor of BDP member Orhan Doğan, who passed away in 2007, Zana stated, "No war can go on forever. One day this land will have peace. Being respectful of one public is to the benefit of both sides. Friends and enemies alike should know that this unity will eventually bring peace to this land."