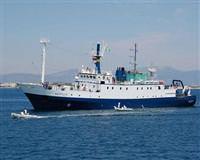 It has been announced that the two pilots aboard the Turkish jet shot down by Syria were killed in the line of duty.

The General Staff has announced that the bodies of the two pilots who were flying the F-4 jet shot down by Syria have been located at the bottom of the sea.

The news was released in an internet announcement made on the General Staff website. The announcement stated that the search and rescue efforts, which have been ongoing since June 22nd, 2012, when an RF-4 aircraft belonging to our Air Forces Command was shot down by Syria in an international air field in the East Mediterranean have located the bodies of Pilot Captain Gökhan Ertan and Pilot Lieutenant Hasan Hüseyin Aksoy at the bottom of the sea. Efforts to recover their bodies are ongoing, the announcement stated.

The General Staff also offered their greatest condolences to the pilots' family and love ones.