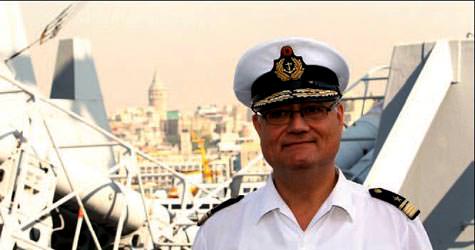 The Standing NATO Maritime Group 2, a multi-national fleet currently consisting of German, French and Turkish frigates has arrived to Istanbul.

Speaking at a press conference held on 'Bayern' frigate moored at Istanbul's Sarayburnu, German Rear Admiral Thorsten Kahler, explained that one of the most significant functions of the fleet is to provide defense for national security and terrorism. "The Standing NATO Maritime Group 2 (SNMG2) is a high-security force of the alliance. We are carrying out a maneuver in Istanbul as part of our mission to carry out a defense task against terrorism in the Mediterranean."

Kahler also emphasized in his address that the fleet's presence in Istanbul had no connection to the recent political developments between Turkey and Syria.

The Bayern frigate was introduced to the media following the press conference. At 138.9 meters length and 16.7 meters width, the frigate, which operates with a crew of 218, is capable of a speed of 29 kilometers.