Syria on the agenda for Foreign Affairs Minister Davutoğlu 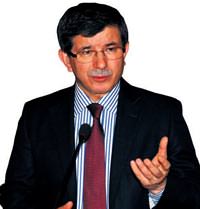 Paris will be hosting a Friends of Syria Group meeting tomorrow, during which support will be offered to both the Action Group formed in Geneva and the opposition committee established in Cairo.

Friday's Friends of Syria Group meeting in Paris aims to widen the block against Syrian State Leader Bashar Assad to include support given to the Action Group developed in Geneva and the opposition committee recently formed in Cairo.

Foreign Affairs Minister Ahmet Davutoğlu is headed for Paris today. Meeting with the Paris administration for the first time since Nicolas Sarkozy's departure, on Friday Davutoğlu will be joining his French counterpart Laurent Fabius for the Friends of Syria Group meeting.

The main aim of what will be the third Friends of Syria Group meeting is to increase the number of Assad opponents and to ensure the participation of at least 120 nations. As a result, both Russia and China who used their UN vetoes, are intended to be further isolated. Ankara is also in support of Paris' efforts. While the anti-Assad group is fast increasing, amongst the nations most recently included are South Africa, Vatican and Algeria.

The committee formed by the Syrian opposition during the recent meeting in Cairo will be attending the Friends of Syria group for the first time this Friday. While the meeting aims to establish a complete break of ties with the Assad administration, deliberations as to who will be officially recognized as the nation's representation is still ongoing due to the inability of the opposition to unify as a single power.

Following suit, after the Chinese administration made contact with the Syrian opposition, Russia is also planning to meet with the opposition in the next few days. Diplomatic sources are evaluating this situation as being proof that Russia will no longer be able to continue offering support to the Assad administration.