Turkey’s aim is for PKK to drop weapons 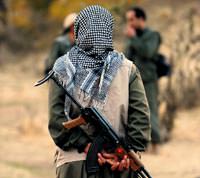 The government is hoping to have reached a solution by 2014 in which weapons will no longer be what talks, politics will. The goal is to either have the PKK drop their weapons flat out or for the militants in Turkey to be withdrawn into Northern Iraq as another method to ensure weapons are relinquished.

While the quest for 'common ground' when it comes to finding a solution to the Kurdish issue continues, Ankara is taking steps towards embarking on a new era of 'weapon-free politics'. The main point of action in the government's new weapon-free strategy is to ensure the PKK drop their weapons or be made to withdraw into Northern Iraq in an effort to have weapons outside of the border. The PKK's recent announcement of a temporary ceasefire, as they have in the past, is considered to be a tactical maneuver.

As a result however, the terrorist organization may hand over their weapons to an independent reliable observer and politics may do the talking up until the end of 2014. In order to initiate this strategy, Deputy Prime Minister Beşir Atalay as well as a number of other ministers and deputies are planning to spend the summer visiting villages and neighborhoods in order to spread the message that weapons are not the solution.

SEEKING A WAY OUT

Meanwhile the state has decided to stage 'incessant operations' on those who do not drop their weapons, while is also evaluating an exit strategy for those groups that are willing to cut all ties with the organization's arms. Prime Minister Tayyip Erdoğan will be reverberating the message that they will continue to struggle against the terrorist organization while also will try to negotiate with its political extensions. Signs of the state's new climate were revealed during the recent National Security Council where it was expressed that, "The facilitating of peace and a solution and all of the common sense steps taken to achieve this will not be sabotaged."

Establishing legal regulations for those who cut their ties with the PKK is something the judiciary will be discussing when the legal year resumes. The recent release of 15 PKK members, seven of which were children, who turned themselves in to security forces at the Habur border on June 21st, may be used as an effective model in the future.