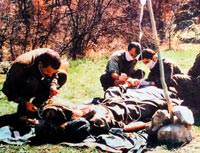 Information obtained from a PKK member who goes by the codename 'Serhat Colemerg' , who escaped the PKK to surrender to border security forces last March as well as from documents belonging to the organization that were confiscated in a shelter has shed light on Syria's involvement with the PKK terrorist organization.

A report compiled on intelligence received shows that Syria has designated two hospitals, one in Damascus and the other in Aleppo, where PKK members are allowed to receive treatment, including Colemerg, who is now facing a trial requesting he receive aggravated life imprisonment.
Over the past three months, 50 wounded PKK members, either as a result of air operations or live combat with security forces, have received treatment in Syria after which they have either remained or returned to Northern Iraq.

Meanwhile, also according to the report, in an attempt to take advantage of the current uprising in Syria, the PKK has set up a television station similar to Roj TV entitled "Ronahi TV" (Brightness) and is now conducting broadcasts. The PKK is supposedly using the channel to conduct propaganda for the terrorist organization's Syrian leg, the PYD.

Information has been obtained regarding the PKK having also set up a youth camp in Syria's Kobani district entitled 'Komelen Ciwan'. The PKK is stated to also be securing new admissions to the organization through Suruch. This is where members and materials are being passed through between Syria and Iraq. Also of note in the report was that certain PKK members are being trained in bombs and weaponry at North Iraq's Gare Mountain after which they are sent to Turkey via Syria.
The report also denotes that the PKK's armed wing HPG has now been divided into Eastern and Western wings as a result of the uprising in Syria and the resulting vacuum in the region.
Syrian national Halef El Muhammed, who uses the code name 'Sofi Nureddin' is stated to be in charge of the East wing while Fehman Hüseyin, code name 'Bahoz Erdal' has taken over the Western wing.
The report also expresses that 60 percent of the organization's administrative organs consist of Syrian nationals. According to the report all access to Mount Cudi over the past two months has been done through Syria. It has also been detected that PKK members have opened a corridor between Mardin's Nusaybin district and Syria's Kamışlı through digging a 200 meter-long tunnel.

The PKK has increased its number of militants in Syria from 90 to 400. The number of air operations was stated to have been a factor in a number of camps in Kandil being transferred over to Syria. According to the report, the PKK, which has set up mines along the Turkish border, is now also moving their guided missiles situated in their main camp in Kandil over to Syria.

ORGANIZING DIRECTLY ACROSS FROM CIZRE

The PKK is supposedly acting from the Deriko Hemko region in Syria, located just across Şırnak's Cizre district and an area where the Syrian state has completely lost all of authority. The Afrin region is one especially chosen for its proximity to the Amanos Mountains in Hatay and supposedly the PKK has begun arming certain villages there. Due to the lack of any semblance of authority in the region the PKK has also taken over petroleum stations in Kurdish regions and are now supposedly operating them themselves.