Russia to unravel the Syria knot 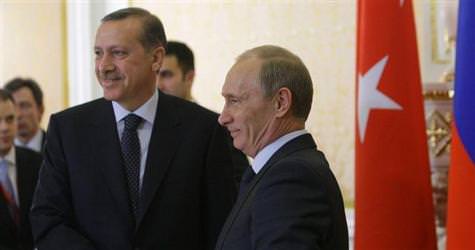 Prime Minister Tayyip Erdoğan is currently in preparation to make a critical move when it comes to the Syria situation. Erdoğan is intending to seek out a solution to the political knot created from Syria shooting down a Turkish jet and Assad’s refusal to step down, by paying a visit to Russia, the Baath regime’s most staunch supporters.

According to sources, Erdoğan has now added a trip on his agenda to Russia to pay a face to face visit with Russian President Vladimir Putin. During this one day trip, scheduled for July 18th, Prime Minister Erdoğan will not only be paying a visit to Putin, but he will also be meeting with Russian Prime Minister Dmitry Medvedev.

Prime Minister Erdoğan will be relaying details on the Turkish jet which was shot down by Syria in the Mediterranean when he meets face to face with Putin. Erdoğan will also relay the fact that Assad has yet to fulfill any promises and will deliver the message, "Withdraw your support for Assad, he is now also hurting you."

Prime Minister Erdoğan also put a call in to Putin yesterday in order to offer his condolences for the disastrous flooding in Russia. Meanwhile, after a ten-day vacation, the Prime Minister will be returning to his regular intense schedule. Today, Erdoğan will be attending an AK Party meeting for provincial chairmen.