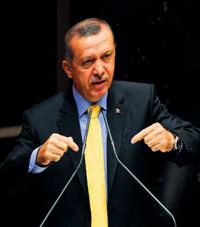 Reiterating that our plane was shot down by Syria in international waters, Erdoğan stated, “They attacked without warning in a completely hostile manner.”

Prime Minister Tayyip Erdoğan was speaking at a meeting for AK Party Provincial Deputies when he clearly reiterated that the Turkish F-4 jet was not shot down in Syria's air field it was shot down in international air and criticized the Chairman of CHP for speaking on behalf of Bashar al-Assad.

During his address, Prime Minister Erdoğan delivered the following messages:

A CAMPAIGN AGAINST TURKEY: An American newspaper, with ulterior motives and an evident stance against Turkey claims that our plane was shot down in Syrian territorial waters. The newspaper solely referred to a 'military official from the Pentagon' when issuing this accusation. What is crucial is that certain media establishments in Turkey as well as certain writers along with the main opposition party CHP are trumpeteering through this American newspaper. They place no importance on the Turkish Republic on the General Staff on the Ministries and the Prime Minister. They pay esteem to an American newspaper that publishes completely fabricated news and commit such an atrocity as using this lie against Turkey every single day.

TURKEY'S BAATH SPOKESMAN: Are you aware that Assad does not feel the need to discuss the downing of our plane? In Turkey, Kılıçdaroğlu already speaks enough on behalf of Assad. Under Kemal Kılıçdaroğlu's leadership, the Baath Party has overtly become Turkey's Spokesman for the Baath party. They have quite a good exchange. The stance embraced by the Chairman of CHP is one that is hurtful towards the memory of our pilots who were killed. It goes against the nation.

RUSSIA VIOLATED AND APOLOGIZED: A 15-aircraft Russian fleet violated our air field in the Black Sea. We issued a warning then our planes took off from Balıkesir and Merzifon and ensured their planes left our air space. They apologized later.

Erdoğan also mentioned a conversation he had with legendary leader Aliye İzzetbegoviç that took place right before his passing. Erdoğan said, "Just hours before his death he whispered in my ear 'Bosnia is entrusted to you, it is a remnant of the Ottomans'. I want to remind once again that as Turkey we will not forget this massacre that took place in recent history in the center of Europe, nor will we let it be forgotten.