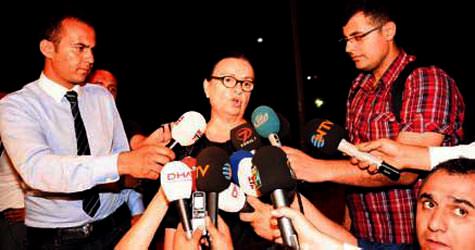 Sixteen suspects, including Prof. Dr. Büşra Ersanlı, who were amongst the 140 arrested in connection to the Istanbul KCK case, have benefited from the recently passed third judicial reform package and were released yesterday pending trial.

Several defendants in a case involving the Istanbul Kurdistan Communities Union (KCK) appealed for their release in an attempt to benefit from a law included in the newly approved third judicial reform package. Yesterday, Istanbul's 15th High Criminal Court approved the appeals of sixteen out of the 140 suspects who are being held in custody and has since released the suspects, including Prof. Büşra Ersanlı pending trial.

The following suspects were released yesterday: Büşra Ersanlı, Kemal Karagöz, Kazım Şeker, Büşra Beste Önder, Canşah Çelik, Erdoğan Baysan, Medeni Demirkapu, Zekiye Ayık, Cüneyt Özil, Birgül Arvas, Suna Varsak, İbrahim Etem Yıldız, Mehmet Kumek, Uğur Taşdemir, Nizamettin Özmen and Mustafa İpek.
In addition, an appeal from suspects and their attorneys to provide their defense in Kurdish was rejected on the basis that the former regulation would still apply due to the fact that the matter did not necessitate an interim ruling. The other arrested suspects in the trial will remain in custody until the next hearing which has been scheduled for October 1-9th.

In a statement made on July 9th, Foreign Affairs Minister Ahmet Davutoğlu commented on Ersanlı by stating, "Ms. Büşra is an academic who took on an extremely democratic stance during the February 28th era. I don't believe she is a terrorist. However, the fact that I do not accept the situation as a minister does not give me the right to intervene in the judiciary."

ERSANLI WAS UNDER ARREST FOR 8.5 MONTHS

Prof. Dr. Büşra Ersanlı was arrested on November 1st, 2011 and remained in custody for 8.5 months. Ersanlı is facing heavy accusations in the case indictment and may be charged with 19 to 38.5 years imprisonment. Amongst the charges connected to Prof. Ersanlı is being the 'leader of an armed terrorist organization', 'conducting propaganda for a terrorist organization', and 'violating the 2911 Meeting and Demonstration Marches Code'.

Prof. Ersanlı and the 15 other suspects whose appeals were accepted by the court were released from the Silivri Penitentiary at approximately 22:30 Friday. Ersanlı was greeted by relatives and friends upon her release and responded to questions from the press. Mentioning that she has waited for nine months now to go to court, Ersanlı stated, "A significant number of those being tried in this case are from the BDP. We are extremely pleased to be released; however we are sad to leave our friends behind."