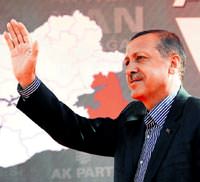 Stating that nobody should expect they will negotiate with the terrorist organization, Erdoğan stated, “We will only continue our struggle against the PKK”.

• Prime Minister Recep Tayyip Erdoğan emphasized that ever since they came to power they have been struggling against the PKK and trying to find a solution and said, "There is no way we will negotiate with the organization."

Prime Minister Erdoğan was in Iğdır yesterday for the opening of an airport when he delivered the following messages:

Later, Prime Minister Erdoğan went on to Van for the AK Party's provincial congress, where he spoke out harshly against the PKK and the BDP. Referring to Leyla Zana, Erdoğan inferred that the terrorist organization and the BDP were uncomfortable with her announcements.

NEIGHBORHOOD PRESSURE ON ZANA: Ms. Leyla Zana, an independent deputy who was considered a candidate by the PKK recently made an announcement. She expressed her hopes for reaching a solution. I met with her in an extremely sincere environment lacking in any form of prejudice, where we both present in order to reach a solution. Both the BDP and the terrorist organization are both seriously uncomfortable with the fact that Ms. Leyla Zana met with us and expressed her hopes for a solution. They have spoken out against it over and over. At present they are trying to silence Zana through threats and intimidation as well as exerting neighborly pressure. This is just how the terrorist organization and its extension are.

TRADING LIFE IN THE EARTHQUAKE: On October 23rd Van suffered an earthquake; however the terrorist organization and BDP refused to stop their provocations and bloody attacks. As 75 million grieved the lives lost in Van, and joined together to mobilize, the separatist terrorist organization continued to shed blood as the BDP continued its provocations. While doctors from all over the country came out to volunteer their services, a BDP deputy inconsiderately blamed a doctor of violence. They also didn't stop the death of a police officer from Van being killed in the line of duty. The Van earthquake has resulted in once again pulling the masks off of the terrorist organization as well as the BDP and its municipalities. All they do is trade in blood and lives.

THEY ACT ON BEHALF OF KURDISH ENEMIES: While we were in a state of vigilance following an attack that killed two pilots in the line of duty in international waters, the terrorist organization went and ruthlessly hit our security forces from behind. All they do is work for enemy circles against this country, nation as well as our Kurdish brothers. That is all they do.

PULL YOUR CHILDREN OUT OF THE HANDS OF THE ORGANIZATION: I want to speak out from here to all of the Kurdish mothers. Let us all together say stop to this savagery. Pull your children out of this organization. Save your children from this organization which is blocking any sort of solution. A new era is beginning in Turkey. The hope of reaching a solution is growing and blossoming in Turkey. You can also add strength to this hope for a solution. You can also give your hearts. This country is all of ours."

This is a translation of an article originally written by Yahya Bostan and Özkan Aydın.