'This will be my final candidacy' 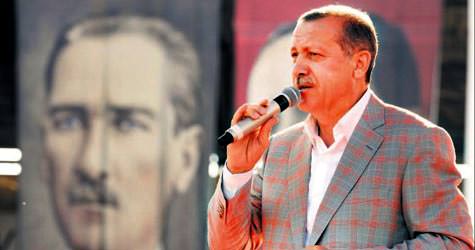 Announcing that he will be running for his final term as AK Party Chairman on September 30th, Erdoğan signaled a change by stating, “We will remain us as we transform. The AK Party will grow but we will lesson our desires.”

Speaking at an AK Party congress in Eskişehir, Prime Minister Tayyip Erdoğan made a number of striking announcements regarding the party's future and the upcoming Grand Congress on September 30 while also revealing the names of the party's new members.

Erdoğan delivered a series of messages during his address including that he will be running for a fourth time as AK Party General Chairman and also inferred there may be new members joining the party including Numan Kurtulmuş.

* WE WILL REMAIN OURSELVES AS WE CHANGE: "We have begun working on the grand congress. We will remain ourselves as we transform. We will change while remaining loyal to our true principals. We will transform in compliance with our roots. We will not become something else through this change, we will be building the future through the inspiration of the past. The AK Party is deeply rooted in the nation's spirit.

* THE AK PARTY WILL GROW: We will be expanding the AK Party. We will be allowing Turkey to grow as well but not our desires. As we have done up until now, we will continue to embrace Turkey as a whole. We will not allow for ethnic, religious, language or lifestyle discrimination. We have respected everyone's lifestyle. From here on out we will patiently explain that this entire public needs to trust in us. We will change and we will make changes. However, we will never break apart from our roots, our principles and our essence.

* WE WILL NOT BE EXPECTING OFFICE AWARDS: In this party, it was always cases themselves that took precedence and not positions in office or titles. This brother of yours Recep Tayyip Erdoğan is mortal. Just like everything created in this world he is also mortal. Whether under the title of Prime Minister or Party Chairman, I have always felt the pride of being a member of this movement. From here on out we will continue our struggle to serve as soldiers. Wherever our nation assigns us is where we will go.

* THE LAST TIME I WILL RUN: (In reference to the Grand Congress on September 30th) As we promised, we were elected for a third and final time in the June 12th, 2011 parliamentary elections. Everyone has the chance to become a deputy again after taking a one-term break. This arrangement has already been added to the September 30th Grand Congress in Ankara. Therefore, as promised we will also run for the general chairmanship of the party for a fourth and final time.

* THEY CAME AFTER US WITH TERRORISM: They tried to shut down our party yet were unsuccessful. They said, 'you cannot choose a president' and we said, 'we can and we can even have the public do it.' They came after us with terrorism and with violence. If you notice the separatist terrorism organization only attacks the AK Party and not other parties. Why? It is because the AK Party is strong and is the separatist terrorist organization's only fear."