'Take the lead in reforming the regime' 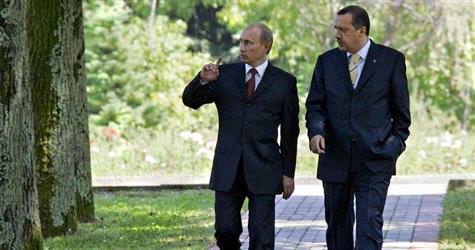 As the U.N. Security Council votes on a resolution that threatens Syrian authorities with sanctions, Erdoğan will be heading for Russia where he will request that the transition process in Syria be initiated and that Putin assist in leading the reform of the Assad regime.

Prime Minister Tayyip Erdoğan meets with Russian President Vladimir Putin on Wednesday during a six-hour trip to Russia. During Erdoğan's visit, which follows a recent trip by the UN and Arab League Special Envoy Kofi Annan to Moscow, all Turkish, U.S., English and Russian records in connection to the Turkish jet downed by Syria will be brought to the table.

There will be two critical issues to be discussed during tomorrow's meeting between Russian President Putin and Erdoğan: Syria and the September meeting.

RELAYING HIS EXPERIENCE WITH ASSAD

Erdoğan will be using this opportunity to try to convince Putin against vetoing the new resolution that will be discussed by the U.N. Security Council this week. Erdoğan will also request Putin contribute his leadership to reforming the Syrian regime. The Prime Minister will revisit the decisions made by Russia in Geneva and is expected to point out the importance of the transitional period in Syria commencing. Not only will Erdoğan emphasize the requirement of a monitoring mechanism in order to apply the Annan Plan, but he will also be relaying his own personal experience with Assad to Putin while delivering the message "An open-ended plan will not bring Assad to action."

THE RECORDS ARE ON THE TABLE

Erdoğan will be briefing Putin on the latest information received regarding the June 22nd downing of a Turkish fighter jet by Syria. The recent data received by Russia coupled by the radar records handed over by the United States and England last week will be handled in a comprehensively for the first time in Russia. Erdoğan will be briefing Putin on the records received from the three countries as well as the information compiled in Turkey, while also pointing out that Turkey's approach has been objective.
The second main issue to be discussed during the meeting is the upcoming Turkey-Russia Joint Strategic Planning Group. Putin will be attending the meeting which will be held in Turkey in September and is anticipated to focus on new energy collaborations. The meeting will determine which steps should be taken by joint platforms such as the G-20, Organization for Security and Co-operation in Europe (OSCE) and the Black Sea Economic Coordination Organization.