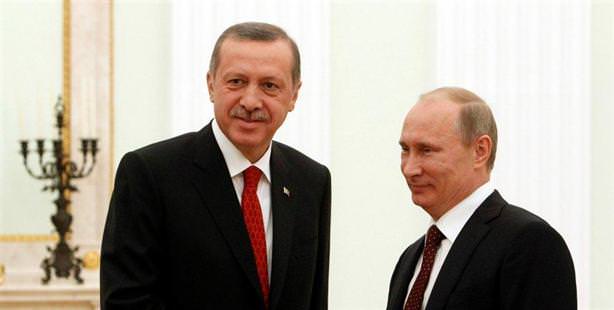 "We discussed the situation in Syria. Russia is pleased Turkey has responded affirmatively to the decisions made during the action group meeting in Geneva. This is a very important foundation on which to reach a solution to the crisis."

Statements made by Prime Minister Erdoğan during the press conference with Putin:

"Every day our military, political, economic and cultural relations reach a higher level. We are two nations that are in solidarity within the region. In accordance with our economic goals, our joint trade volume has surpassed 32 billion dollars. Our political volition towards our goal of reaching 100 billion dollars in trade volume is evident. We definitely have a very important relationship when it comes to tourism. The most important step we will be taking for bilateral relations however is in the area of energy. Russia is our highest supplier of natural gas. We are actually taking a much more significant step in the area of nuclear energy. We are also working in conjunction with Russia on satellite systems.

ON SYRIA'S DOWNING OF A TURKISH JET

There is no document we shared, however when it comes to information-sharing from the moment the incident took place, I spoke with President Putin on the telephone. During this conversation, Mr. President relayed information to me and I briefed Russia on the data derived from our own documents. This is the intelligence-sharing that transpired between us.

Syria's stability is crucial for the stability in the region. We are definitely against any division in Syria. As you know, 18,000 people have been killed as a result of Syria's autocratic structure. There is a regime that is ruthlessly killing its own people. We have 40,000 refugees in our country. There are 150,000 refugees in Jordan and 20,000 in Lebanon. When looking at this picture we do make evaluations. What needs to happen is whatever the public's will is. Whatever happens following Bashar al-Assad need not be decided on by other nations. The decision needs to be made by the Syrian public. An important duty befalls the United Nations Security Council and its five permanent members. The meeting in Geneva established an important road map. We believe that the steps to be taken for this road map will reap results. The extension of this period only brings with it massacres reminiscent of what Assad the father did in the past. What we want is for the massacres to stop. We want peace to be dominant in Syria and for Syria to find harmony through the will of the public."