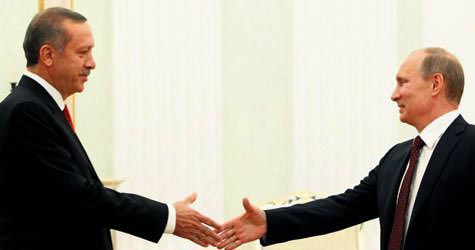 Prime Minister Erdoğan and Russian President Putin discussed Davutoğlu’s recent proposal in Geneva to establish an Assad-free transitional government during a meeting held in Moscow on Wednesday. Following the meeting, Erdoğan commented, “Russia welcomed this option and we presented them with further alternatives.”

Prime Minister Tayyip Erdoğan and Russian President Vladimir Putin held a critical meeting on Syria yesterday. Holding a three hour meeting with joint committees and a one-on-one meeting which lasted an hour, the two leaders then went in front of cameras for a joint press conference.

Erdoğan's message to Putin was, "No other nations, besides Syria should be involved in post Bashar al-Assad decision-making. The decision should be made by the Syrian public."

When journalists asked Erdoğan to comment on Russian Foreign Affairs Minister Sergei Lavrov's statement that Russia has provided Turkey with documents on the fallen Turkish jet, the Prime Minister looked straight at the Russian minister and stated, "There was no exchange of documents."

Upon Prime Minister Erdoğan's return, he announced that Russia was positive regarding the proposal made in Geneva for the forming of a transitional government sans Assad.
In summary, Erdoğan went on to state the following:

NO DOCUMENTS SHARED: (In response to a reference to Russian Foreign Affairs Minister Lavrov's statement that Russia had handed over data to Turkey) "There has been no exchange of data. However, when it comes to information-sharing, I spoke to President Putin when the incident took place. During this conversation, Mr. President relayed information to me and I briefed Russia on the information we had obtained. This is the information-sharing that took place; there has been no exchange of any documents."

WE ARE AGAINST DIVISION: (In response to the question "If Assad is overthrown won't the country go into chaos?" posed by a Russian journalist.) "First and foremost, there is absolutely no contention when it comes to stability in Syria and stability in the region, we feel the same way. We are definitely against any sort of division in Syria. There is a regime however that is ruthlessly killing its own people."

THE SYRIAN PUBLIC SHOULD MAKE THE CALLS: "All decisions following the Bashar al-Assad era should be made by Syria and not by any other country. The Syrian public needs to make the calls. An important duty befalls the United Nations Security Council and its five permanent members. The meeting in Geneva established an important road map."

Erdoğan relayed information on the meeting at the Istanbul Atatürk Airport upon his return from Russia. Erdoğan stated the following in response to a question on the proposal made in Geneva to establish a transitional government without Assad:

When asked how Russia perceived a Syria without Assad, Erdoğan responded by stating, "During our meeting, Russia actually welcomed the idea. He is not against it. There are certain concerns as to what would happen if Bashar was not in power. We also presented a number of alternatives on the issue. When we presented them with these alternatives, they realized that they needed to further consider them."

NEXT MEETING IN THE FALL

Putin announced that the High-Level Strategic Cooperation meeting between Turkey and Russia will be held this fall. The Russian President also stated, "Turkey continues to be an important and strategic partner for us."
Putin also mentioned that Turkey is a preferred destination for Russians to holiday, which he tied to the quality of service provided by Turkey as well as the lifting of via regulations. Emphasizing the advance in mutual relations, Erdoğan stated, "Our joint trade volume has now surpassed 32 billion dollars. Our political volition towards our goal of reaching 100 billion dollars in trade volume is evident."

A report, released by Reuters news agency prior to the Erdoğan-Putin meeting, states, "Erdoğan's signature mix of business and politics has expanded NATO-member Turkey's presence in the Middle East, Africa and former Soviet Union, where Russia still jealously guards its interests. Turkey today is much more assertive and independent than it was 20 years ago," read the analysis, which went on to state that Turkey and Russia resemble each other.

This is a translation of an article originally written by Yahya Bostan and Mesut Er.