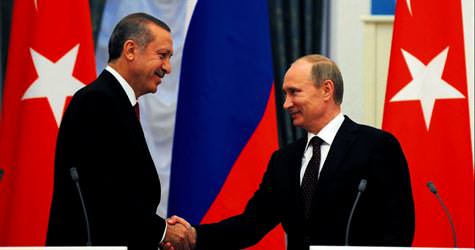 During the Erdoğan-Putin meeting in Moscow, the Turkish party proposed an election government system reminiscent of what transpired in Egypt. The members of this government would consist of members of the party in power that have not been involved with the violence, opposition members, military staff as well as non-partisans.

The wind is changing direction for Russia the biggest supporters of Syria's Baath regime and President Bashar al-Assad. After Prime Minister Tayyip Erdoğan's recent meeting with President Vladimir Putin, Russia has finally been persuaded to accept that Assad's political lifespan is over.

According to the information obtained, during the meeting the Turkish committee proposed the Egypt model as a prospective solution to the situation in Syria. Turkey suggests the same transitional process adopted in Egypt with Hosni Mubarak's resignation be applied to Syria.

The proposal, which Russian State Leader Putin welcomed, is as follows:

A transitional election government or council will be formed, consisting of members of the party in power, the opposition, non-partisans and military representatives. This government or council will work on creating the groundwork for a democratic election, by making constitutional and legal preparations. They will allow for the formation of political parties. Elections must transpire in a democratic environment in order to allow the Syrian public to decide their own future."

Turkish and Russian collaboration in assisting Syria transition to a democratic regime according to this model was also requested. Another point emphasized during the meeting was that the new administration should also include supporters of the Baath regime. The example of Iraq was brought up as a lesson to be learned while it was emphasized that eliminating all actors in the Baath regime could bring down the entire system.

As a result, the following formula was developed: In order to realistically reflect Syria, members of the Baath regime will serve in the new administration, however only under the condition that they were not involved in the violence. "Let those Baath members who have not been involved in the bloodshed take part in Syria's future."

The Turkish side also underlined the necessity to seek justice against those involved in the violence and those who shot bullets at their own public, and stated, "The Syrian public and its judiciary should be the ones to rule on those responsible for the bloodshed." The viewpoint that Syrians should be the ones to dictate Syria's future was affirmed during the meeting, where it was mutually stated, "Third-party countries should not stake a claim on Syria's future."

RUSSIA SEEKS A WAY OUT

The Russian administration is hoping to maintain its acquisitions in Syria after the Assad regime. Therefore up until now, Russia has been seeking 'an honorable exit' from which to deviate from its pro-Assad line. Putin, concerned the nation may divide, the chaos may increase and the internal strife following the Assad era might deepen, added that eliminating all of the members of the Baath party may result in further tension in Syria. Putin requested the Geneva process continue and the duration of monitors in the region be extended. In return, Prime Minister Erdoğan requested Putin offer his support towards the formation of a new Syria to follow the Assad era in order to put an end to the deadlock. Turkey stated that they have the same concerns as Russia and believe that the Syrian opposition needs to be supported in order to ensure the civil strife does not deepen following the Assad-era.