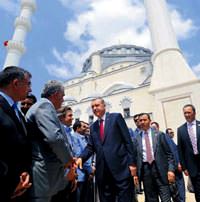 A mosque befitting of the Ottoman Empire’s legendary architect Mimar Sinan, whose major works are located on the European side of the metropolis, was opened by Prime Minister Erdoğan yesterday in Ataşehir, in Istanbul’s Asian district.

A FEW 'SELATIN MOSQUES'
During the opening, Erdoğan thanked everyone who had a hand in the building of the mosque, from architect Hilmi Şenalp to Minister Bayraktar, Ataşehir Mayor Battal İlgezdi, the engineers and construction workers.

What were our intentions in bringing a work like this to the Anatolian side of Istanbul? There is the Selimiye Mosques on the European side of the city. There is also Sinan's first work in Istanbul, the Şehzade Mosque. Meanwhile, there is also the Sultanahmet Mosque and the Fatih Mosque. Yet there is no Friday mosque, or 'selatin' mosque as such on this side of the city. We wanted to have a few of these types of mosques on this side of the city and so we decided to build one." Selatin mosques are unique mosques built at the request of the Ottoman Sultans as places for people to gather for the Friday prayer
Erdoğan went on to state: "We are obligated to be one; we are obligated to be united. Together we are obliged to improve and build Turkey and Istanbul. In honor of Mimar Sinan and practically as his grand children it is undoubtedly our duty to build a monument such as this in his honor. Unfortunately up until now our country has never had something like this devoted to him, this will be the first.

Erdoğan went on to call on the public to visit the mosque and stated, "We are obliged to love one another. We cannot exclude or marginalize one another. We have to be united and in solidarity and Turkey will be very different in every way." Erdoğan offered his best wishes to everyone for the Ramadan holiday and gave Ondimba and Nujaifi each identical miniatures of the mosque. Later, Erdoğan was joined by his special guest to cut the ribbon for the Mimar Sinan Mosque's official opening.

Iraqi National Parliament Speaker Nujaifi said, "Right now, Turkey is both building a civilization and humanity. During this difficult time, we need Turkey to play this role. The Turkish public's embracing of their religion and Islam only increases our admiration for them."

Gabon President Ali Bongo Ondimba said, "Today's ceremony was the most meaningful and sacred since I have arrived in your beautiful country. The great Turkish nation has led us throughout history. Turkey will continue to enlighten the world today as it has done so in the past. May God protect Turkey."

THE MOSQUE BUILT IN 22 MONTHS FOR 40 MILLION

The Mimar Sinan Mosque was built according to the architect's well known 'six-column plan type', he has used on a number of smaller mosques. The Mimar Sinan Mosque is the first time this plan has been implemented on a Mosque of this scale. The mosque's dome is 42-meters high, and the four minarets are three tiered and reach 72 meters in height. The mosque has a 10,000 person capacity. It also has a 300-vehicle covered parking lot, conference halls and class rooms.