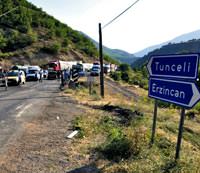 Fifteen terrorists were killed in a shoot out between security forces and PKK terrorists who had blocked off a road in Hakkâri's Şemdinli district and were staging propaganda and checking people’s identity.

PKK terrorists had blocked off a road in Şemdinli where they were staging propaganda and checking the identification of passersby when police began tracking them last night. Security forces followed the terrorists to a mountainous region 15 kilometers from Şemdinli when fighting erupted with security forces. Fifteen terrorists were killed and one officer and two specialist sergeants were heavily wounded in the cross fire. Special Forces teams and trained commandos have been dispatched to the combat location. Conflict is currently ongoing with a number of helicopters and jets active in the region. Special Forces police officers are being positioned in front of public establishments in the city center for preventative measures.

Meanwhile, gendarmerie Special Forces teams staged an operation on a group of PKK terrorists in a mountainous and forested region in Tunceli. Special Forces troops were dispatched to the region by Sikorski helicopters. Combat erupted between PKK terrorists and security forces shortly after they dropped down into the region. The PKK's escape routes were especially targeted and have been heavily bombed in the operation supported by Cobra helicopters.

Last week, a group of 15 terrorists in the same area conducted propaganda for the PKK and then set five lorries on fire. Security forces tracked down the terrorists who were supposedly planning on staging additional attacks. Amongst the information coming in is that the combat between Security Forces and PKK terrorists is currently ongoing in two different locations.